The most widely seen images from 9/11 are of planes and towers, not people. Falling Man is different.

The photo, taken by Richard Drew in the moments after the September 11, 2001, attacks, is one man’s distinct escape from the collapsing buildings, a symbol of individuality against the backdrop of faceless skyscrapers. On a day of mass tragedy, Falling Man is one of the only widely seen pictures that shows someone dying.

The photo was published in newspapers around the U.S. in the days after the attacks, but backlash from readers forced it into temporary obscurity. It can be a difficult image to process, the man perfectly bisecting the iconic towers as he darts toward the earth like an arrow.

Falling Man’s identity is still unknown, but he is believed to have been an employee at the Windows on the World restaurant, which sat atop the north tower. The true power of Falling Man, however, is less about who its subject was and more about what he became: a makeshift Unknown Soldier in an often unknown and uncertain war, suspended forever in history. 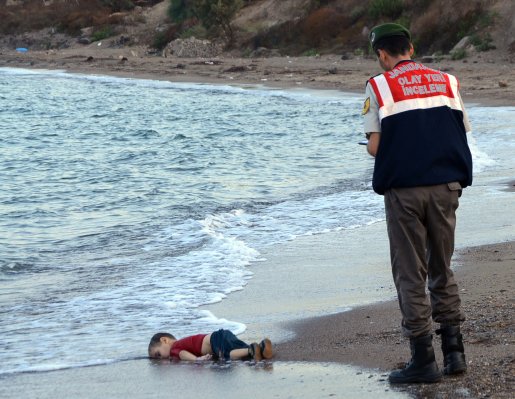 That Heartbreaking Photo of Alan Kurdi Was Taken a Year Ago. It Still Matters
Next Up: Editor's Pick