The line snakes out of the door and into the Olympic athlete village in Rio de Janeiro, a United Nations of track-suits and warm-up gear: Algeria green, Bangladeshi blue, United Arab Emirates white. Some of the world’s fittest human beings have gathered on this Friday evening to endure thirty-minute waits for food that, in theory at least, could spoil their Olympic dreams.

At the end of the long queue? The same Big Macs, McNuggets and milkshakes that are available at many of the more 36,000 McDonald’s restaurants elsewhere in the world–and often with far shorter waits. Yet the temporary outpost in the athlete village–which is open to athletes, coaches, and other personnel bunking there––may be the hottest ticket in Rio.

Price surely has something to do with it. A longtime sponsor of the Olympics, this McDonald’s is free. But Olympians waiting patiently for their fries and McFlurries on a recent night offered a range of other reasons for the popularity of the ultimate commodity restaurant. (The company says it doesn’t have data on the volume of orders at the location.)

“It breaks the monotony,” says Kevin Cordes, an American swimmer who won a gold in the 4 X 100 medley relay and says he had a burger before his first race in Rio. “You feel comfortable and happy eating. You get to relax, and slow down a bit.”

Others see a (not so) fast food hit as a way to celebrate a hard-earned win. Aleksandar Radovic, a member of Montenegro’s water polo team, felt he deserved a treat after they beat the U.S. earlier in the day to clinch a spot in the quarterfinals. “McDonald’s is not good for the athletes,” Radovic acknowledges. “But our food in the village is so boring. Sometimes you need to change. This was a big victory. We will celebrate with one Big Mac, and one Coca-Cola. That’s it. And if they don’t have a Big Mac, we will celebrate with Chicken McNuggets.”

Not that Radovic thought that any of it was good for him. “I would also like to apologize to my coach, Vladimir Gojkovic,” says Radovic. “But maybe if we go to the semifinals, we will celebrate with a Big Mac until we lose.” (He’ll enjoy it: On Tuesday, Montenegro beat Hungary, winner of nine Olympic gold medals, to advance to the semifinals.)

Members of the Croatian handball team wait for their meal at a McDonalds in the Olympic athletes village in Rio de Janeiro, Brazil, July 30, 2016.
Charlie Riedel—AP

No Olympian was under the impression that McDonald’s was power food. A Portuguese track athlete was about to explain his favorite order before a teammate stopped him from going on the record, lest their coach and training staff get upset. Nicola Muscat, a swimmer from Malta, sheepishly admitted eating a McChicken sandwich three days before her first race (she finished seventh in her 50-m heat). “This is like confessing my guilt to a priest,” Muscat says.

Jamaican shot putter O’Danye Richards, who won bronze at last year’s world championships and starts throwing Thursday, says the key to managing his McNugget and McFlurry habit is moderation. “It’s all about how much you eat,” says Richards. “If you don’t overdue it, you’ll be fine.”

He’s not completely wrong says nutritionist Dan Benardot. “Olympians have the capacity to metabolize fat in a far superior way than the rest of us,” says Benardot, a professor of nutrition at Georgia State University who has worked with Olympic gymnasts, marathoners and figure skaters. “That doesn’t change the fact that it’s not the best entity for competing athletes.”

Other athletes say the golden arches are a better choice than the offerings in the athlete mess. “The food in the dining hall is not good,” says Mohad Ishak, a 10-m platform diver from Egypt whose competition starts Friday. “And I have to eat something.” He thinks he’s better off downing two Big Macs a day than consuming nothing. “I’m not going to put on weight from two Big Macs,” Ishak says, adding that his coach agrees–and often asks him to bring back fries.

Perhaps the most prominent athlete to tout the power of McDonald’s is the Jamaican track star Usain Bolt, who famously said he loaded up on McNuggets before he broke the 100-m world record at the 2008 Olympics. But there is griping in the village that McD’s may have become too popular.

“Oh my God, it pisses me off,” judoka Kayla Harrison says of the long lines. “It’s insane.” Two days after becoming the first American to win back-to-back judo gold medals, she tried to sate a long-denied craving for a Big Mac and McFlurry. “We went and stood in the line for ten minutes, and we were like, ‘OK, we’re not doing this,’” says Harrison. “People were walking by with three bags. They must be like, ‘I’ll have 24 cheeseburgers’.” 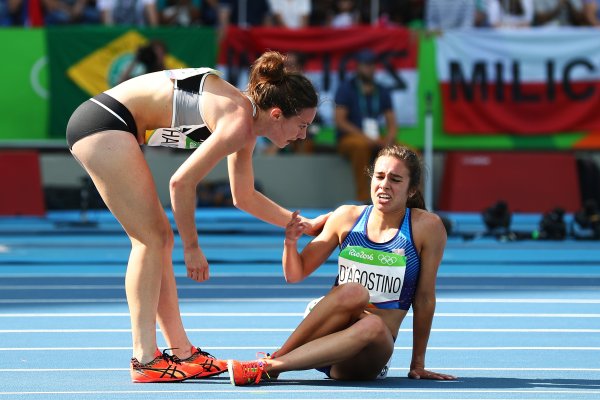 Olympic Runner Stops to Help Rival Who Fell During a Race
Next Up: Editor's Pick