The Story of the Happiest Photo of Usain Bolt

Usain Bolt of Jamaica competes in the Men's 100 meter semifinal on Day 9 of the Rio 2016 Olympic Games in Rio de Janeiro on Aug.14, 2016.
Cameron Spencer—Getty Images
By Andrew Katz

This picture of the fastest man on Earth happened by chance. Cameron Spencer, a Sydney-based photographer with Getty Images, was infield at the stadium in Rio on Aug. 14, shooting the men’s high-jump qualifiers, when he turned to photograph the 100-meter semifinal race that was about to happen.

Jamaican sprinter Usain Bolt was among the track stars looking to make the final that night. He won that 100-m twice before, at Beijing in 2008 and London in 2012. Spencer, who photographed both of those races, decided to try and get a shot. He positioned himself at the 70-m mark. A few other shooters were near him infield.

Using a Canon 1D X Mark II, with a 70-200mm lens, he focused at 135mm and set it at a slow shutter speed (1/40th of a second) to try and capture the motion. The gun went off. The runners sprinted off the blocks. “I was carrying three remotes and my handheld camera,” Spencer tells TIME. “So when he was sprinting, I had four cameras firing,”

Bolt is seen grinning but his opponents are a mix of blurry or game-faced, too focused on trying to beat him. “He was ahead enough that he kind of looked back. I think he was looking back at other athletes, gave a big smile and I managed to capture the shot with some motion,” Spencer tells TIME. “I was standing still but I was panning my lens with him as he passed, so my upper body was moving with him. Once he passed me—like he was gone—I looked at my pictures to see how it went and fortunately there were some sharp ones,” Spencer says. “I didn’t realize the extent of the smile when I shot it. And I was like, ‘Oh, wow, he’s in focus and moving and smiling.’ I sort of knew it was a special moment. His full stride, he’s smiling, he has that amazing perfect technique and he’s look across seven of the top fastest runners in the world and he’s enjoying himself,” he says. “For someone to look around and have a good time, it’s mind-blowing.”

But that’s all he saw at that moment. Spencer dumped his cards so editors could look and move the pictures, and headed back to the high-jumps. The whole thing was about four or five minutes.

The picture sprinted around the Internet as Bolt made history in the 100-m. Spencer didn’t get a real look at any of his pictures until the end of the night. His wife, who also works for Getty and is in Rio, texted him about the shot. His phone started going off but he realized he needed to focus on the upcoming races.

Spencer said it’s not necessarily harder to shoot Bolt than other super-fast track athletes but admitted there’s a challenge in coming up with a different image than the hundreds of other photographers documenting the same thing. “Expecting the unexpected with Bolt is what makes him so great to photograph,” he says. “I wanted to go somewhere different, try something risky and if it works it’ll pay off, and if it doesn’t I miss the shot,” he says.

Spencer is pleased the picture has resonated with the masses. “People who know photography know it’s hard to capture that. And people who know Bolt, they say he’s pulling the greatest expression ever.”

It’s not the first time a picture taken by Spencer went viral. In July, he was at a rugby match when he photographed a black cat, in mid-air, running down the field line. This time is different. “At least it was finally a picture that I was passionate about,” he says. “It’s rewarding because it’s gone viral based on its photographic merit.” 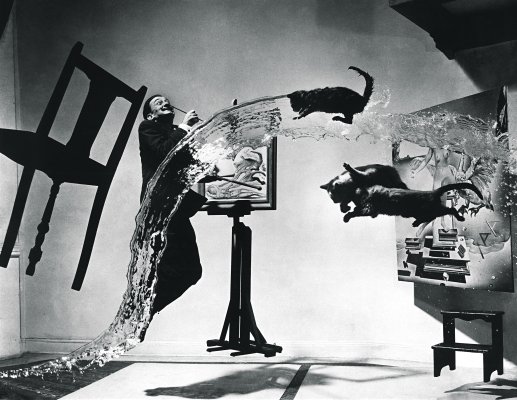 The Photo That Changed Modern Portraiture
Next Up: Editor's Pick