Republican Presidential candidate Donald Trump speaks at the Merrill Auditorium in Portland, Maine, on Aug. 4, 2016.
Sarah Rice—Getty Images
Ideas
By Richard Siklos
Siklos is a writer and an Adjunct Professor at New York University’s Department of Media, Culture and Communications

The last few fevered weeks of the U.S. presidential contest have given rise to a stream of uneasy debates, among them whether the sacred line between journalistic objectivity and opinion should be breached by reporters and editors who view a Donald Trump victory as dangerous.

The Columbia Journalism Review called it a “Murrow moment,” citing among other things famed investigative journalist Edward R. Murrow’s 1954 report condemning Joseph McCarthy. The New York Times’ media columnist last week said dropping the pretense of objectivity when covering Trump is “a shock to the journalistic system” that “upsets balance, that idealistic form of journalism with a capital ‘J’ we’ve been trained to always strive for.”

I’d like to suggest something even more tectonic is afoot: it’s less about how news organizations cover their subjects and more about why a growing swath of consumers of news (also known as voters) seems to be favoring emotion over fact. Call it the “Emoji Moment.”

Every day there are fresh outrages from a wide range of media outlets on Trump’s business track record, dishonesty, demagoguery—you name it. And while the drumbeat appears to be having an effect (for now), with Hillary Clinton widening her lead in national polls, the effect seems muted. Part of this is, of course, attributable to the declining influence of so-called “mainstream” media in the age of digital and especially social media, as well as the counter-influence of conservative commentators like Fox News host Sean Hannity and Web maven Matt Drudge, not to mention Clinton’s own well-documented shortcomings.

But what is new is how, with every daily twist, Trump defies convention and confirms the progression of a movement that puts “feelings” ahead of “facts.” We’ve all read by now Trump’s famous assertion, in a deposition for a lawsuit he filed against an author, that his estimation of his net worth on a given day was based on his “feelings” as much as financial analysis.

I’d wager that many Trump fans don’t recoil at this anecdote; they admire it. Why should they care whether he is worth $250 million or $10 billion—he has the houses, the apartments, the jet, the copter, the TV show. The “feeling” that he is a mogul is just as important as the facts underneath them, or the real story of how he got to where he is, and at whose expense. (Paradoxically, Trump himself cared enough to sue over the questioning of his net worth. The lawsuit was dismissed.)

The peculiar advent over the past couple of years of emojis—originally designed in Japan for mobile phones as caricatured, visual representations of moods and now a de facto language geared for short bursts and attention spans—echoes the Trump campaign ethos. Opponents and critics are vexed and dismayed by his lack of specificity or accuracy on economic plans or how exactly that wall is going to be built let alone how Mexico is going to pay for it. But what his supporters see is the American Flag emoji or the Angry Face or the Flexed Biceps.

This is not entirely new news. A lot of academic work has been done by psychologists and neuroscientists showing that voters mainly go with emotion over reason when they are casting their ballots. Among them, a 2014 paper by academics from the University of Amsterdam and University of Toronto posited that “disgust sensitivity” is a critical factor: people who tend to be more easily disgusted also tend to be socially conservative and possess “negative attitudes towards groups seen as threatening traditional social values” including immigrants and foreigners.

But the melding of this notion with a waning interest in factuality takes it to new levels. The belief system underpinning a free press and many American institutions—including the electoral and legal systems—hinges on the idea that the people deserve the truth to make “informed” decisions. Maybe what’s really happening is that large segments of the population have had enough of facts they don’t like or can’t relate to—not to mention the establishment figures who typically deliver them—and would rather make decisions based on how they feel. (This mirrors the narrative in the U.K. “Brexit” vote, which many commentators said was a rejection of “experts” who laid out all the reasons to stay in the European Union.)

This is the consequence of the democratization of information through technology and perhaps, ironically, the political correctness that Trump has railed against that has given rise to such things as “safe spaces” at U.S. colleges. After all, this thinking goes, if we’re going to be overly concerned about everyone else’s feelings, let’s give voice to our disenfranchised middle-American white anger.

With the journalistic forces against Trump so incessant, you can only conclude one of two things about his loyal and not insignificant base. Either they buy wholly into Trump’s “dishonest” and “crooked” tropes about the media and his opponent, or they just embrace Trump’s feelings-first approach and everything else sounds like grownups talking in a Peanuts cartoon. Probably, it’s both. The journalistic hand-wringing about how to cover this singular election is understandable and important, but it may be less about objectivity versus opinion and more about how to stay relevant in a world where truth matters less and less, and colorful nuggets of emotion resonate the loudest. 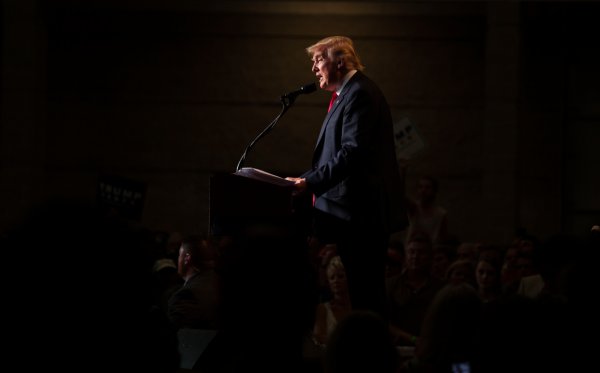 Donald Trump Is Missing an Essential Fact About the Debates
Next Up: Editor's Pick