Donald Trump Vowed to Close the Gap Between Church and State

Donald Trump, 2016 Republican presidential nominee, pauses while speaking during a campaign rally at the Erie Insurance Arena in Erie, Penn., on Aug. 12, 2016.
Bloomberg via Getty Images
Ideas
By Jeff Nesbit

With Donald Trump’s campaign losing ground among independent voters in recent weeks due to a series of well-publicized mistakes, the GOP presidential nominee has tripled down with the one base of political support that has steadfastly remained with him—white, evangelical voters—by promising to dismantle the laws that separate church and state in America.

It is a provocative move designed to energize a key conservative demographic vital to the national Republican Party, but one that could potentially anger moderate and independent voters once it becomes more widely known.

In a startling off-the-cuff speech to a gathering of pastors in Florida last week, Trump threw away his prepared remarks and promised, over and over, to give evangelical churches the power to essentially spend unlimited sums of tax-exempt money on politics. Nearly 80% of evangelicals already support Trump. It is one of his largest supportive demographics—and one of the GOP’s most reliable voting blocs.

Trump promised that one of his first efforts as president would be to dismantle laws that keep Christian churches from spending tax-exempt money on political advocacy. He promised to vigorously attack a law established in the 1950s—from legislation sponsored by then-Senator Lyndon Johnson amending the U.S. tax code rules—that prevents tax-exempt organizations such as churches or educational institutions from endorsing political candidates. The ban on 501 C-3 charitable organizations from engaging in political advocacy has come to be known as the “Johnson Amendment.”

“If I get elected President, one of the early things, one of the absolute first things I’m going to do is work on totally knocking out the Johnson Amendment,” he said. “The power you have is so enormous. It’s not like you represent two percent of the country and it’s going to be difficult. You’re probably 75, 80 percent. If you want to put your full weight … I mean, can you imagine if all of your people start calling up the local congressman and the local senator?”

Trump promised the evangelical pastors that, by abolishing the prohibition on churches spending tax-exempt money on political advocacy, it would reverse the slow, steady decline in church attendance and public attitudes toward Christian beliefs in the United States.

Trump told the pastors that evangelical voters would make the difference in key battleground states like Florida, Virginia, Ohio and Pennsylvania. And if white, evangelical Christians put him in the White House, he promised to return the favor.

“You have a chance to do something that will be earth shaking,” he said. “I literally mean it: earth shaking. You got to get your people out to vote.”

Trump, whose religious background consists of childhood visits to Sunday school, also told the evangelical pastors that he was their best hope in the 2016 presidential election. He paraphrased evangelical megachurch pastor Robert Jeffress, who has said the Bible has called for a strongman such as Trump in the White House—and his characterization of him to make the point.

Much of the media coverage of the Trump candidacy in the past few weeks has focused on mistakes (like his remark on “Second Amendment people” and Hillary Clinton). But Trump’s stunning proposal to change the 501 C-3 tax rules so that white, evangelical churches can spend money on political advocacy as an arm of the national GOP isn’t a mistake—it’s a move designed to save his presidential campaign at the expense of a time-honored principle of American democracy. 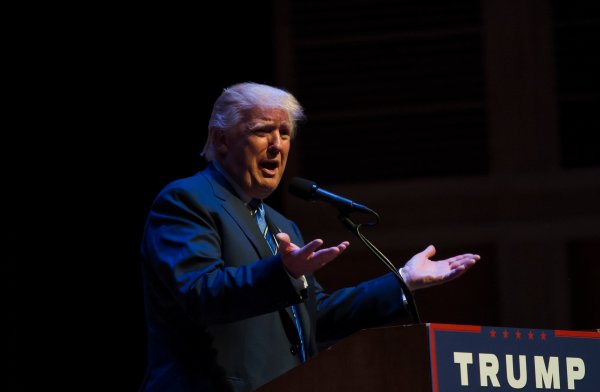