Jamaica's Elaine Thompson celebrates after she won the Women's 100m Final during the athletics event at the Rio 2016 Olympic Games at the Olympic Stadium in Rio de Janeiro on August 13, 2016.
Franck Fife—AFP—Getty Images
By Sean Gregory / Rio de Janeiro

Make it a triple for Jamaica in the women’s 100-m, and a leg up in the rivalry between the sprinting-obsessed nation and the United States.

For the third Olympics in a row, the fastest race in the Olympics belongs to Jamaica. Elaine Thompson, owner of the world’s fastest time this year entering the Rio Olympics, crushed the field in the final, finishing the race in 10.71 seconds. Tori Bowe of the U.S. got the silver, clocking in at 10.83 seconds. Shelly-Ann Fraser Pryce, who won this race at the last two Olympics and was seeking to become the first woman to ever win three-straight Olympic 100-meter races, came in third, at 10.89 seconds.

(Read More: Team USA is About to be Kicked Off its Doping High Horse in Rio)

Thompson’s victory set off celebrations in large swaths of Rio’s Olympic stadium. Hundreds of spectators were covered in green and gold. The decks of Rio’s Olympic stadium were draped with the green, black, and gold flags of Jamaica. You got the feeling, however, that a historic individual win for Fraser-Pryce – who received the loudest cheers as the finalists were announced – would have lifted the stadium’s spirits even higher.

After Thompson crossed the finish, she went over to hug Fraser-Pryce and drape the Jamaican flag around her teammate. Fraser-Pyrce, her home-country’s colors dyed in her hair, smiled politely. The bronze was clearly not what she had in mind.

Regardless, Thompson’s win sends an early message on the first big night of track and field in Rio. As good America has been in the swimming pool, Jamaica plans to return the favor at the track. The competition should only get better for Jamaica on Sunday night, as Usain Bolt is set to race in his final Olympic 100-m. He’ll try to become the first man to win three straight titles in the event.

For the U.S. women, the 100-m gold drought lives on. No American has won gold since 1996, when Gail Devers took her second straight Olympic title. (Marion Jones won in Sydney in 2000, but was stripped of her gold medal after she admitted to using steroids in 2007). Between 1960 and 1996, an American woman won the 100-m race in seven of 10 Olympics.

Mo Farah’s second straight Olympic gold in the 10,000-m was the night’s other highlight. Farah fell early in the race–and another runner, trying to avoid him, nearly stomped his head–yet the distance star from Great Britain recovered in time to defend his title. The last lap sent a roar throughout the stadium, as Paul Kipngetich of Kenya charged ahead; the British great then countered down the stretch. Right before the finish, third Olympic gold safely around his neck–he also won the 5,000-m in London–Farah held his hands to his lips, as if blowing a kiss, then placed them on his head in disbelief. After crossing, he collapsed.

American Galen Rupp, Farah’s training partner who famously dueled with Farah on his London home turf in the 2012 Games, joined the lead pack late. However, there would be no podium encore. Rupp, a silver-medalist at the last Olympics, finished fifth.

In the heptathlon, Nafi Thiam of Belgium took the Olympic title away from Great Britain’s Jessica Ennis-Hill, one of the leading lights of the London Games. Ennis-Hill grabbed silver; Brianne Theisen-Eaton of Canada won bronze.

Earlier, LaShawn Merritt, the men’s 400-m Olympic champion in 2008 who bowed out in the opening round in London because of a hamstring injury, cruised into the 400-m final Sunday night. There, he’ll face off with Kirani James of Grenada, the defending Olympic champ.

It will fall on Merritt to notch a sprint win for the Americans Sunday night. Or maybe Justin Gatlin, who’s run the two fastest times this season, can upset Bolt.

But on the first night of track and field’s marquee speed events, Jamaica held serve yet again. 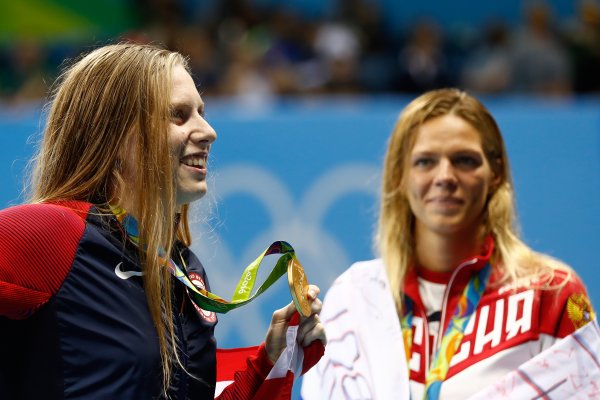 Team USA Is About to Be Kicked Off its Doping High Horse in Rio
Next Up: Editor's Pick