Goal keeper Hope Solo #1 celebrates with Julie Johnston #8 of U.S. Women's National Team during the second half of a friendly match against Japan on June 5, 2016 at FirstEnergy Stadium in Cleveland, Ohio.
Jason Miller—Getty Images
By Eliana Dockterman

The International Olympic Committee is none too happy with U.S. soccer goalie Hope Solo. Solo called Sweden’s soccer team “a bunch of cowards” after Sweden upset the U.S. team during the Friday quarterfinals of the Rio Olympics.

IOC spokesman Mark Adams described Solo’s outburst as “disappointing” during a Saturday briefing in Rio de Janeiro. However, Adams said Solo is “unlikely” to be censured by the committee. “People are free to say those things. We wouldn’t stop their right to express themselves, within boundaries, obviously,” Adams said.

Solo said she was upset by Sweden’s strategy during the game, holding back and letting the U.S. set the pace. A tied score of 1-1 at the end of overtime led to a shoot-out, and Sweden stole the game from the heavily-favored Americans. “The best team did not win today,’’ Solo said after the game. “I strongly and firmly believe that.’’

The loss is a devastating one for a team whose World Cup win last year earned them a ticker tape parade in New York City. The U.S. Women’s team also won three gold medals in the last three Olympic Games and was expected to take gold, or at least medal, this year.

Sweden Coach Pia Sundhage, who coached the American team to gold in both 2008 and 2012, had stronger words for her former player. “I don’t give a crap,” she said, according to Sports Illustrated. “I’m going to Rio. She’s going home.”

Some on social media have also criticized Solo for making such statements.

This isn’t the first time Hope Solo has fired off insults to her detriment. Throughout the Olympics, crowds in Brazil booed her because of several posts she made to social media about Zika.

She’s even gotten into hot water for criticizing her own teammates. During the 2007 World Cup, Solo was benched in favor of veteran Brianna Scurry even though Solo had goaltended three consecutive shutouts. Brazil beat the U.S. 4-0 in that game. Afterwards, Solo told the press: “There’s no doubt in my mind I would have made those saves … It doesn’t matter what somebody did in an Olympic gold-medal game in the Olympics three years ago.”

Solo later told reporters that those comments came at a time when she was coping with the recent death of her father. Still, she was banned from the U.S. third-place game against Norway and had to fly home on a separate plane.

When her Friday comments went viral, Hope Solo took to Twitter to offer context. She also admitted that she’s “bad at” losing. 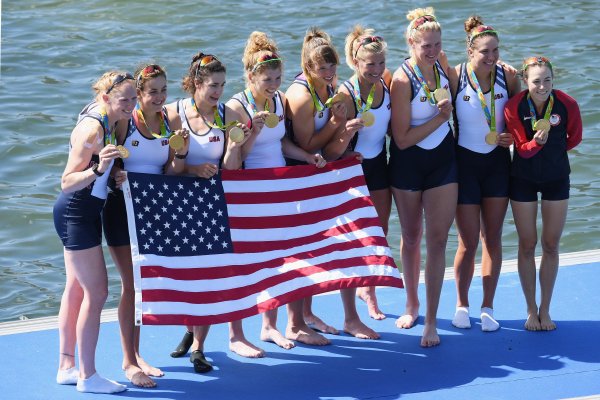