Aly Raisman‘s parents became internet sensations during the Rio Olympics when their tense reactions to their 22-year-old daughter’s performance went viral. However, Aly’s dad, Rick Raisman, told Today on Saturday that they just want to be there to support their daughter.

“It’s one of those things,” he says of being an Olympic parent. “You’re there to support your kids and daughter you see them work and sacrifice day in and day out … but it makes it all worth it in the end.

“We have no idea we’re even moving when we’re in the stands, we’re so caught up in the moment,” he said.

However, he joked that his new fame might be eclipsing that of his gold medal-winning daughter.

“I tell Aly I’m more famous than her!”

Rick and wife Lynn Faber appeared on Today alongside Simone Biles‘ parents Ronald and Nellie Biles, who also shared what it’s like to watch your daughter compete in the biggest event of her life.

“It’s a calmness for me but for her she’s squeezing my hand really hard,” Rick said about their comparatively stoic appearances in the stands while watching Biles compete.

Simone and Aly took home the gold and silver, respectively, during the all-around individual competition on Thursday. Earlier in the week, the women and Team U.S.A. took home gold in the team all-around event. 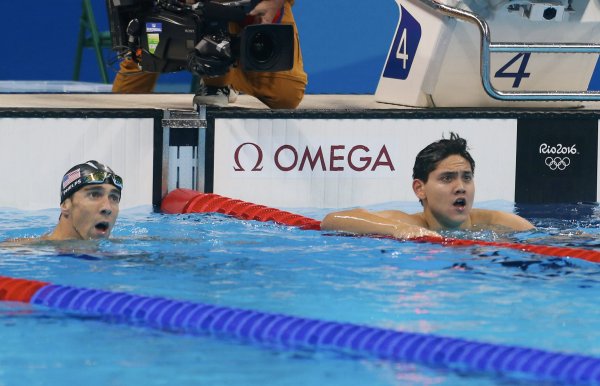 Joseph Schooling Beat Michael Phelps at Rio. But Long Before That, He Was a Fan
Next Up: Editor's Pick