Frank Dillane as Nick Clark in Fear the Walking Dead and Andrew Lincoln as Rick Grimes in The Walking Dead.
AMC
By Megan McCluskey

Both The Walking Dead and its spinoff series Fear the Walking Dead begin with a character waking up to find that the world as they knew it has been turned inside out. Caught in the chaos of a zombie apocalypse, both must decide what type of people they are going to be as civilization crumbles. That’s where the similarities between Rick Grimes of The Walking Dead and Fear’s Nick Clark end. Both characters live in a shared universe of extreme moral ambiguity, and their reaction to that couldn’t be more different.

Rick (Andrew Lincoln) has steadily become The Walking Dead‘s anti-hero, echoing characters popular when the show premiered, such as Breaking Bad‘s Walter White and Homeland‘s Nick Brody. Rick is a compromised protagonist who struggles with dark choices. Nick (Frank Dillane), on the other hand, has flourished since the beginning of the zombie apocalypse. Pegged as someone who would die early on, the end of the world has had a rehabilitating effect on his character. This evolution has been compelling not only because it is unexpected, but also because of how quickly it took place. In Nick, Fear has found a new kind of protagonist for a zombie-filled world of horror.

Rick is introduced in The Walking Dead as the paragon of virtue, a sheriff’s deputy who wakes up from a coma—that was the result of a wound he received in the line of duty, no less—to find the world has gone to hell, but who is no less willing to be the honorable and brave man he has always been.

On the opposite end of the spectrum, viewers meet Nick while he is passed out from a heroin-fueled bender—a state of existence he spends most of his time seeking out. An errant junkie who tortures his family with his addiction, Nick at first seems to lack any of the qualities necessary to survive in the real world, let alone an apocalyptic version of that world.

While Rick originally has—what appears to be—an unshakeable moral code to do what is right, as time goes on, that code begins to crumble, turning him into the very type of person he sought to avoid becoming. Specifically, Rick’s journey is mirrored with that of his former best friend Shane, who Rick killed in season two after he endangered the group.

In an interview with MTV leading up to TWD‘s sixth season, showrunner Greg Nicotero spoke about Rick’s shifting morality. “What we’ve definitely seen in the past five seasons in terms of Rick Grimes is…There is no hesitation to take a life if that means it protects a life in [his] group,” Nicotero said. “And going down that dark path of last year’s theme was, how far can you go before you’re not a human being anymore?”

Meanwhile, on Fear, Nick is headed in the opposite direction. The addict who would do anything to get his hands on another hit has been humanized by the fall of humanity. Forced to face both severe withdrawals and the events of his past that made him turn to drugs in the first place, Nick has emerged not necessarily as a hero, but as a good person and a protagonist who is flawed enough to be relatable.

In the midseason finale, viewers saw Nick refuse to leave Celia’s compound with Madison and Alicia to go back to Strand’s boat. Referencing Celia’s belief that humans are the real monsters, not walkers, he tells Madison, “She was right about us…Celia, she knew what we are.”

However—unwilling to accept this fate for himself—Nick stays behind, choosing to set out on his own rather than sacrifice the moral ground he has so recently attained.

Nick has not faced nearly a fraction of the horrors in one and a half seasons of Fear that Rick has dealt with in six seasons of The Walking Dead. But if the central question of both shows is whether or not people can still be human beings in a world stripped of its humanity, then Nick is definitely supplying the more uplifting answer—for the time being, at least. 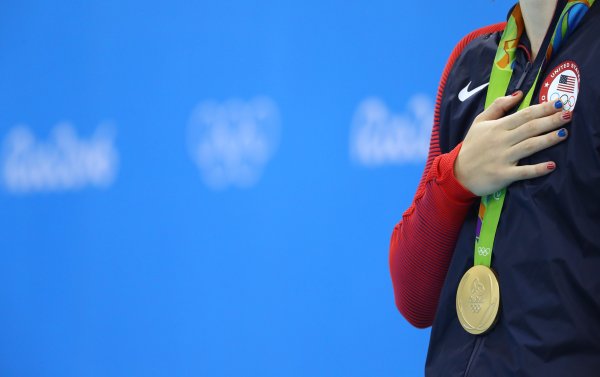 How NBC Took Advantage of Olympic Fans
Next Up: Editor's Pick