A string of bombings across Thailand has left four dead and upwards of 20 injured in what experts say was a coordinated attempt to undermine the country’s military junta.

The attacks appear to have targeted busy tourist towns. Shortly before midnight on Thursday local time, two bombs hidden in flower pots detonated on a bustling road in Hua Hin, a resort town about 120 miles south of Bangkok, killing a female food vendor and injuring about 20 people, according to reports from several news agencies. Explosions were also reported in Patong Beach, a hub of nightlife and tourism on the island of Phuket, and in the towns of Trang and Surat Thani.

The blasts come amid a holiday weekend celebrating the Thai Queen Sirikit’s 84th birthday, and less than a week after a controversial national referendum that ushered a new constitution — the Southeast Asian nation’s 20th in less than nine decades. The constitution, critics say, only further cements the power of the ruling military junta, which took power in a coup in May 2014.

Read More: Thailand Bombings: Here’s What You Need to Know

Thailand is not unfamiliar with violence and bomb attacks. The country’s restive south is home to an active and frequently violent Muslim separatist movement, which has seen 5,000 people die since 2004. The separatist movement has typically confined itself to the south, but some venture that its leaders, jilted by the junta in peace negotiations, may be broadening their horizons. But Zachary Abuza, an expert in Southeast Asian politics and security at the National War College in Washington, D.C., says the blast don’t have the hallmarks of an insurgent attack. “My initial gut feeling is that this is not southern insurgency. It’s not that they couldn’t, it’s that it’s been a very long time that they’ve done a coordinated attack across multiple cities in multiple provinces, and they’ve never been able to do it outside of the south.”

Thai police told reporters Friday that the wave of explosions was not linked to Islamic terrorism. “The bombs are an attempt to create chaos and confusion,” junta leader Prayuth Chan-ocha told reporters. “We should not make people panic more.”

Almost exactly a year ago, a blast at Bangkok’s Erawan Shrine, a popular tourist destination, killed 17 and injured over 100. The attack has been linked to a Turkish ultra-nationalist group seeking retribution for Thailand’s deportation of Chinese Uighurs, a Muslim minority group. But experts suspect that the attacks on Thursday and Friday were the work of antijunta movements cultivated inside Thailand, rather than international actors.

“These are all tourist destinations,” Abuza tells TIME. “Someone is trying to do harm to the Thai economy. That’s the Achilles heel of the junta.”

Thailand’s politics have long been fraught — the country has observed a dozen coups since 1932 — but experts see the current polarization of Thai political society as particularly hostile. In the two years since Prayuth’s military junta seized power, the country’s economy has atrophied and standards of human rights have eroded, with critics of both the junta and the Thai monarchy regularly facing trial in military courts. “I’m surprised there isn’t more political violence,” Abuza says.

The recent referendum only further antagonized the junta’s opponents. The new constitution has provisions for an unelected Prime Minister — a title currently held by Prayuth — and will allow military leaders to directly appoint the 250 members of the upper house of the country’s legislature. Though 60% of Thai’s who voted supported the document, turnout was low (58%), and many have questioned the fairness of the referendum.

“The postreferendum climate is mostly one of sullen acquiescence,” Paul Chambers, a lecturer at the Institute for South East Asian Affairs in the northern Thai city of Chiang Mai, told TIME on Friday. “The people are tired of this junta and they realize they’ll have to go along with the military shadows over Thailand.” 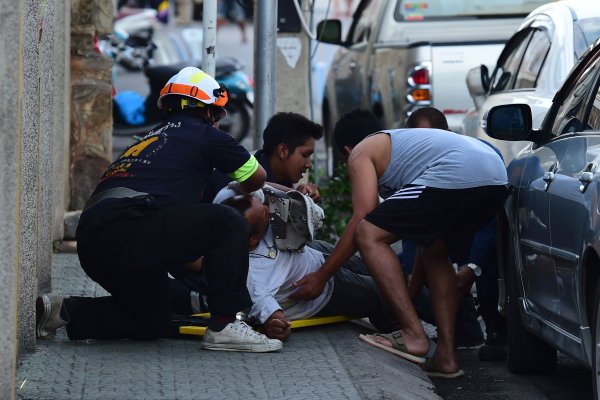 Thailand Bombings: Here's What You Need to Know
Next Up: Editor's Pick