Gold medalist Simone Manuel of the United States celebrates during the medal ceremony for the Women's 100m Freestyle Final on Day 6 of the Rio 2016 Olympic Games at the Olympic Aquatics Stadium on August 11, 2016 in Rio de Janeiro, Brazil.
Clive Rose—Getty Images
By Alice Park/Rio de Janeiro

She’s Katie Ledecky’s roommate, and Simone Manuel just made sure both of them are contributing to the room’s golden tally.

In a stunning upset over the heavily favored Australian sisters, Bronte and Cate Campbell, Manuel won gold Thursday in the 100m freestyle, sharing it with Canada’s Penny Oleksiak after they finished in a rare dead heat, which set both an Olympic and American record. The win makes Manuel the first African-American woman to win gold in an individual swimming event.

Manuel acknowledged that the potential to make history weighed on her. “I definitely struggled with it a lot coming into the race tonight,” Manuel said afterward. “I tried to take the weight of the black community off my shoulders; it’s something I carry with me being in this position. This medal is not just for me but for the African-Americans who came before me…and for the people who come behind me. I would like one day for there to be more of us, so that it’s not Simone the black swimmer because the title of black swimmer makes it seem like I’m not supposed to be able to win a gold medal, or not supposed to break records. That’s not true. I work just as hard as everybody else and I want to win just like everybody else.”

Manuel’s groundbreaking moment denied the Campbell sisters one of their own. The Australians were hoping to become the first siblings to win medals in the same individual Olympic swimming event. Bronte Campbell finished 0.34 behind for fourth and Cate 0.54 behind in sixth. Sweden’s Sarah Sjostrom won the bronze.

Maybe Ledecky’s three golds in Rio are rubbing off on her. Manuel is an Olympic rookie, but she said in training camp that she was more excited than nervous about her first Games. Ledecky, she says, “really calms my nerves, and I hope I do the same for her. Sometimes she puts a lot of pressure on herself to break the world record every time she swims. As a teammate, one of my jobs is to make sure she is okay, so if we’re in the ready room I try to make her laugh and remind her to have fun.”

Manuel, a 20-year-old Stanford student, recognizes that what she does in Rio can resonate far beyond the Olympics. In an interview with TIME before the Games, Manuel said the racial tension that has roiled the nation affects her, and that she sees the Olympic spotlight as a way for her to do her small part.

“I’m hoping what I can do in Rio is give some people hope that even though there are some tough things going on in the world, you just have to keep fighting,” Manuel told TIME. “Our ancestors did. What we do [now] is a reflection of what they have done for us. It’s also a platform for what will happen in the future. We just have to keep fighting and persevering to try to make change.” 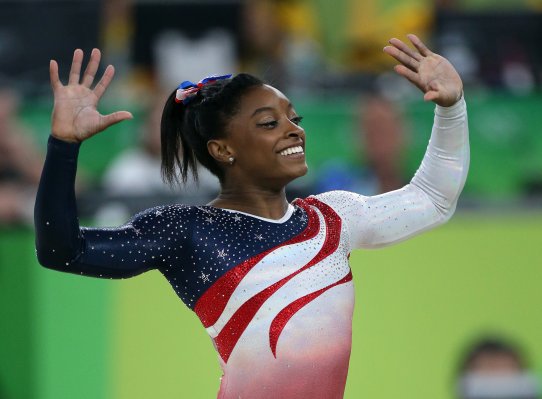 The 4 Moves That Separate Simone Biles From Other Elite Gymnasts
Next Up: Editor's Pick