The world has never seen an athletic exit like this.

Michael Phelps won his 22nd career gold medal in spectacular fashion Thursday, once again demolishing his rivals in the 200m individual medley and setting-up what turned into a historic night for U.S swimming.

Rio is the fourth straight Olympics Phelps has taken gold in the event, and he did so by a wide margin, far outpacing the rest of the field. Silver medalist Kosuke Hagino of Japan trailed Phelps by nearly a body-length. China’s Wang Shun took bronze. American Ryan Lochte, Phelps’ longtime friend and rival, finished a disappointing fifth.

(Read More: All of Team USA’s Gold Medals in One GIF)

The win gave Phelps his 13th individual gold medal–an Olympic record that burnishes his title as the world’s most decorated Olympian.

“Right now, I don’t know how to wrap my head around that,” Phelps says of his golden haul. “I don’t know that to say. It’s been a hell of a career.”

Phelps walked briskly to the starting block after being announced for the race. Brazil’s Thiago Pereira swam in the lane his right, the chants of “Thi-a-go! Thi-a-go! Thi-a-go!” raising the electricity in an already energized building. After dueling with Lochte and Pereira for the first 100-m, Phelps took the lead and never let it go––making it clear that another win was inevitable. After touching the wall first, Phelps stared ahead, then moved to his left to shake Lochte’s hand as an Olympic opponent for the final time. He’s done some version of this routine 22 times now. Somehow, it’s not getting any older.

Phelps wasn’t the lone American to win gold Thursday. Ryan Murphy won his second gold of these Olympics, in the 200-m backstroke: Americans have now won the event in six straight Olympics. He set the Olympic record in the 100-m backstroke on Monday.

(Read More: The Pool in Rio Might Be Helping Swimmers Set Records)

Later in the evening, Simone Manuel made history for the U.S., setting a new Olympic record in the 100-m freestyle and becoming the first African-American woman to win an individual swimming gold. She shares it Canada’s Penny Oleksiak, after they finished in a remarkable dead heat. That race was supposed to make history of a different sort: Bronte and Cate Campbell of Australia, who already won a relay gold together, were trying to become the first siblings to share an Olympic podium in an individual swimming race. Neither wound up medaling.

After her race, Manuel touched on her pioneering role as the first African-American woman to an individual Olympic title. “I’m super glad that I can an inspiration to others and help diversify the sport,” say Manuel. “But at the same time, I would like there to be a day where there are more of us. And it’s not Simone the black swimmer. The title of black swimmer makes it seem like I’m not supposed to be able to win a gold medal, or I’m not supposed to be able to break records. That’s not true. I work just has hard as anybody else, and I love the sport, and I want to win just like everybody else.”

The night was tinged with disappointment for Team USA. Missy Franklin failed to advance to the 200-m backstroke final after setting a world record in event at the London Games. Her semifinal time, 2.09.74, was nearly six seconds slower than what she swam in London.

Phelps is now a perfect 4-for-4 in Olympic finals in Rio – two relay golds, two individual golds. And he held up four fingers after his win 200-IM win to let everyone know. His final turn on the Olympic stage has been stunning, and singular in sports. “I mean, what do you do with all those medals?” says Dara Torres, a 12-time Olympic medal winner in the pool. “Ah, give them to this friend, my mom, my sisters, my son now.”

Sure, Michael Jordan won three straight NBA titles before retiring for the first time, in 1993. Then he returned to win three more before a second retirement, punctuating Chicago Bulls career with the championship-clinching shot in the waning second of the 1998 NBA Finals. Hard to beat that. But then Jordan came back to play with the Washington Wizards – a team he put together as team president – for the 2002 and 2003 seasons. Neither finished above .500.

Phelps said he was retiring after the London Olympics. He almost fell into despair after a DUI arrest in late 2014. But he’s since turned his life around, proposing to his girlfriend in February 2015; his son, Boomer, was born in May. In Rio, Boomer’s been almost as big a star as his dad. “He’s a great example,” says Torres. “You can have issues in your life but you can come back and turn your life around.”

Phelps swims in the 100-meter individual butterfly Friday night, in the last individual race of his career, and will most likely cap off his Olympic career Saturday night, swimming the butterfly leg of the 4 X 100 medley relay.

“Things kind of starting hitting me this morning,” Phelps says. “I was like wow, I only have to put a racing suit on two more times after tonight. And I only have to warm down one more time after tonight. … It’s wild to think that over 20 years ago, I learned to swim. It’s all stopping, competition wise, in the next 48 hours.”

“I’m biased,” says Torres, when asked if Phelps’ exit has been more impressive than Jordan’s. Swimmers stick together. Her argument, however, is solid. “If you look at the overall picture, yes.” 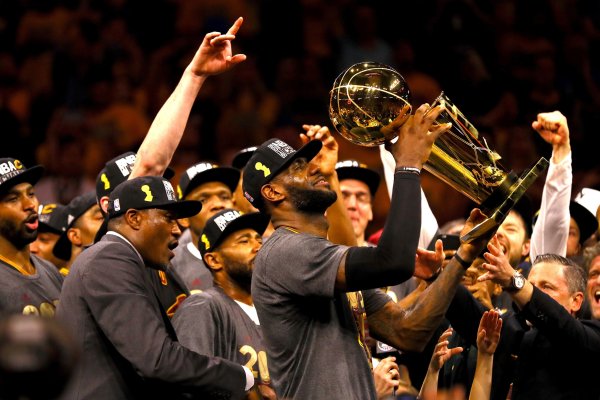 Lebron James to Re-sign With Cleveland Cavaliers in $100 Million Deal
Next Up: Editor's Pick