Why We Need More Women Inventing the Future

I have a good job. Really, it’s not a job. It’s a labor of love. I get to work with entrepreneurs who are inventing the future. Some actually get funded.

We have folks on the ground in major tech hubs (like New York, LA, Boston and the Bay Area; as well as London, Tel Aviv, and Shanghai) supporting technology startups exclusively, so we collide with some of the most innovative minds in the world.

But, man … where are the women?

Reasons to be cheerful

The CTO of the United States is a woman. Women hold CEO titles at IBM, Xerox, HP Enterprise, Oracle and DuPont. The COO at Facebook is a woman. The CFO at Google is a woman. The CEO of Yahoo is a woman. They got acquired by Verizon. A woman is running the M&A show (by the way, I am totally stealing her karaoke idea for people late to meetings).

Oh. And .. a woman made history in July: becoming the first female to win the presidential nomination of a major political party.

But when we look at the number of women in the highest ranks of the most successful emerging (venture-backed) companies, we’ve seen little progress — at least by the numbers — in the past decade.

Having women at the top is important. We know it makes economic sense.

The case for gender equity is compelling. McKinsey did a great job showing this. In 2015, a global study of 4,000 public companies by MSCI showed that companies with strong female leadership posted a return on equity of 10.1% per year versus 7.4% for those without.

That’s the tip of the spear. But what about the top of the funnel…?

At SVB we do an annual survey: we asked ~1,000 executives of young companies about the number of women they have in leadership positions.

In 2016, we see 46% of tech and life science (client) companies have no women in executive positions, and two thirds have no women on their boards of directors. No women. None. Nada.

The findings are virtually unchanged from a year earlier. My personal experience generally mirrors the research. I spoke about this at GES 2016.

To a large degree, it’s the chicken and the egg thing. The pipeline; the role models. The investors; the engineers. Where are they?

The pipeline has had acute focus in recent years (myriad school and college-based programs). Across the board, we have seen a massive emphasis on [female] entrepreneurship by government and by private sector.

It’s not moving the needle.

Corporations are getting on the Diversity & Inclusion bandwagon. But when you dig deeper, you see there aren’t many substantive or meaningful interventions designed to help women move ‘up the ladder’– our outlook survey found only one in four companies (26%) have programs to increase the number of women in leadership positions. Down from 29% the year before. Disappointing.

Diversity in itself is a prickly topic. I’m not a fan of the term, personally. Diversity means different. We are not different. We need the same things.

The phrase “women and minorities” may not be totally constructive either. According to World Bank data, women comprise 50% of the world population. By simple definition, this does not make us a minority.

Focusing on inclusion and representation seems like a healthy endeavor. Investing in extraordinary people (both male & female) is a good strategy.

The good news is that people (of both genders) are more vocal on the topic. Barely a day goes by when this doesn’t appear in the media. Men are standing up as strong advocates for female friends, family members and colleagues.

Educating and informing folks in leadership in our economy on the dearth of women in innovation companies — of this ridiculous imbalance — is critical.

Empowering the next generation

My daughter is six. I would like to think that she and her kindergarten classmates have every opportunity to start, build, scale and lead companies of the future (if that’s indeed what they choose to do).

No question: career opportunities in the future will be highly weighted toward science, technology, engineering and math.

The film’s producer, Robin Hauser Reynolds, decided to make the movie after her daughter dropped out of her computer science program; there were just two women in a class of 25.

That ratio needs to change. It will only change if girls and women recognize where future opportunity lies and pursue the skills these fields require.

Access to capital is another prickly topic. Raising money is never easy (nor should it be). Only the best will survive and thrive — but the bias towards certain constituents (at the expense of others) is hard to ignore.

According to a study in 2014 commissioned by the National Women’s Business Council (NWBC), female entrepreneurs have half the amount of capital of their male counterparts when they start a company.

A Kaufmann Foundation survey also has reported that 80% of women used personal savings as their main funding source.

Now, female-dominated venture capital funds are focusing on, as one female leader said, “going out and doing what we saw a lot of the guys do.”

Before my daughter is old enough to start her own company (which is earlier and earlier these days), I would like to see more young women take their unique perspective and skills into the boardroom, become programmers, become angel investors, and stand beside other women and do the same.

Lift as you climb

There is no single, easy answer here. I’m mindful of the social and gender stereotypes; the generations of embedded (often extraordinarily outdated) thinking — from the way girls are discouraged from pursuing STEM subjects — to the palpable bias in the startup scene .

When I think about this space, and the remarkable opportunity we have, it’s on us to have the most innovative minds in the world shaping our world: we need women in the picture — inventing the future. 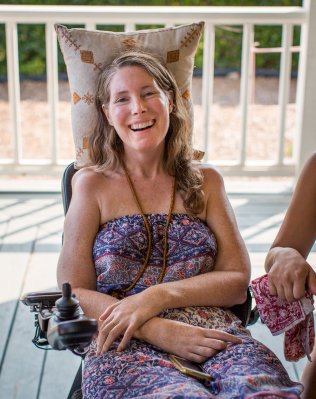 Terminally Ill California Woman with ALS Throws One Last Party Before Ending Her Life
Next Up: Editor's Pick