Suicide Squad Asks Us to Choose: Evil or Extinction

Spoiler alert: Superman is dead. Or at least he appeared to be at the end of Batman v Superman: Dawn of Justice, the March blockbuster that took in $873 million worldwide. So with the Man of Steel out of the way in Suicide Squad, the latest installment from the DC Comics world, the U.S. government ponders how to protect the planet without Clark Kent’s alter ego. Its best idea: turn the world’s most heinous villains into a new crop of superheroes. Superman may not be officially kaput–after all, he’ll appear in next year’s Justice League movie–but there’s symbolic meaning in his presumed death: in today’s blockbusters, the promise of good guys is a thing of the past.

Directed by David Ayer, Suicide Squad convenes a motley crew of miscreants from DC’s back pages, including psychotic psychiatrist Harley Quinn (Margot Robbie), sharp-shooting hitman Deadshot (Will Smith) and pyromaniacal ex–gang member Diablo (Jay Hernandez). They’re part of a scheme dreamed up by a government official (Viola Davis) to leverage evil for the greater good. And while Suicide Squad, which opened on Aug. 5, may not be a perfect movie–indeed, the vast majority of reviewers derided it–it’s nothing if not reflective of our times.

Suicide Squad feels like the coda to a movement among recent comic-book movies, in which heroes increasingly present themselves as antiheroes. Earlier this year, Captain America: Civil War and Batman v Superman tried to negotiate just how much latitude our heroes should have in tackling crime. The year’s most lucrative new antihero, Deadpool, is a foulmouthed wisecracker who hurls playground taunts as he dispatches bullets. Even Captain America, that most wholesome and vanilla of crusaders, turns out to be a Nazi sympathizer (at least in the comic books). With Suicide Squad, the pendulum has swung so far that our heroes are straight-up villains.

The world in which Harley Quinn and Deadshot get to be saviors is one in which leaders like Davis’ Amanda Waller are as ethically compromised as the villains they recruit. The unanticipated side effect of forming a band of baddies to protect us from metahuman terrorists is that we wind up unleashing a real monster where once there was merely a theoretical one. The metaterrorists are faceless, rapidly proliferating and appearing from nowhere on U.S. soil to take the lives of innocent civilians. In the end we put our faith, out of necessity, in heroes who are difficult to deem heroic.

Is any of this sounding familiar? In the real world, news junkies debate whether 2016 is the worst year ever. (For what it’s worth, historians say 1348 was much worse, not to mention the first half of the 1940s.) But between global terrorist attacks, ongoing racial strife and an election season that continues to highlight the fault lines in our culture, Americans are disillusioned. Many voters feel they are compromising their ideals by supporting candidates they can’t fully trust, forced to choose the lesser of two evils and set aside uncomfortable truths. It can be tempting to want to avoid the news altogether.

So why spend $14 at the movies if the big picture stirs up the same kind of existential anxieties one can get for free by glancing at CNN or Fox News? Critics will tell you to stay home not because Suicide Squad is bleak, but because the plot is incoherent, the violence fetishized and the characters one-dimensional. But as the movie’s record-breaking opening box-office take confirms, there’s something about this reflection of dark times that audiences demand to witness onscreen. (And it takes more than just diehard fans to accomplish a $267 million haul.)

This nihilistic-superhero streak may be unsustainable, which is a bet Marvel is making with a 2017 slate that includes Guardians of the Galaxy Vol. 2‘s dancing botanical baby Groot and a bushy-tailed teen Spider-Man in Homecoming. Will good ultimately prevail onscreen? The answer depends on whether moviegoers choose to spend their money to see their reality reflected back to them or to try, if only for a couple of hours, to escape it. 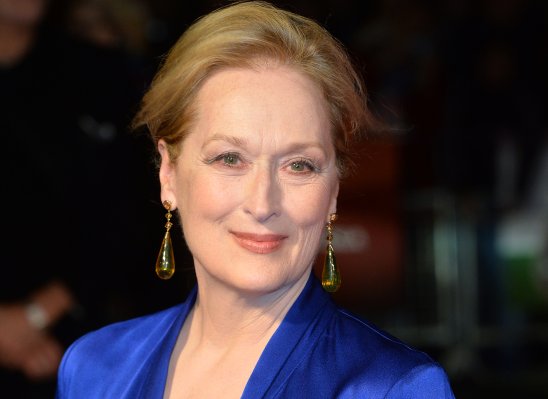 Meryl Streep on Guns, the Wage Gap and How She Picks a Role
Next Up: Editor's Pick