Amid Donald Trump's Stumbles, an America-First Rebellion That Is Just Beginning

In the midst of his historic presidential fizzle, Donald Trump gave a speech to the Detroit Economic Club. It’s always fun to watch Trump deliver a prepared text. He appears to be discovering it with the rest of us, offering a running commentary on what he’s reading, seemingly amazed that the ideas appearing on the teleprompter reflect his own. The result is a strange echolalia: “American steel,” he said in Detroit. Then he repeated it, sounding surprised and impressed. “Steel!” and again, “Steel! … will send new skyscrapers soaring.”

What followed was pretty effective: “We will put new American metal into the spine of this nation. It will be American hands that rebuild this country, and it will be American energy–mined from American sources–that powers this country. It will be American workers who are hired to do the job. American workers. Americanism, not globalism, will be our new credo.” This message was largely unremarked upon in the media coverage of the speech, most of which concentrated on either the silliness or staleness of the policies or the “facts” that were not true. But it is the heart of his appeal, and must be taken seriously, even if his candidacy no longer can be.

On the same day as the Detroit speech, 50 Republican national-security experts said they could not support Trump. A few days earlier, three prominent conservative columnists–Peggy Noonan, David Brooks and Charles Krauthammer–questioned Trump’s mental stability and fitness for the presidency. There was the still unanswered question about Russian influence on his campaign: Which oligarchs have backed his projects? Which ones have loaned him money? We won’t know until he releases his tax returns. And as always, there was a steady stream of noxious idiocies from the candidate himself.

There seems no end to the bad news for Trump, but this is presidential politics–and so there will be. The Trump collapse story will grow old. The media, whose attention span is only slightly longer than Trump’s, will seek new themes. His polling numbers will stabilize–he’s probably at rock bottom right now–and perhaps rebound.

What could bring Trump back? Let me count the ways: a series of terrorist attacks, a string of WikiLeaks embarrassments for the Democrats and Hillary Clinton, more bad economic news, a Hillary Clinton gaffe, a Bill Clinton scandal–or simply a change in the media focus to the weaknesses in Clinton’s message, which has been dragged too far left by Bernie Sanders.

There’s also the possibility–slim, I’ll admit–that Trump will stop stepping all over himself and allow “Americanism, Not Globalism” to take center stage. The notion of “American [steel] in the spine of this nation” has a nostalgic emotional heft. It is a powerful message not just because it has resonance with wage-earning families but because it is an arrow directed at the heart of the Clinton Foundation, which has been an avid cheerleader for globalism and mostly operates overseas, sometimes with money from sketchy international characters. I don’t believe the Clintons are crooks, but their staggering faith in their own righteousness has led to the appearance of impropriety in more than a few of these transactions.

It will probably take a miracle for Trump to rebound sufficiently to win the presidency. But a loss in November is not the end of this story. In the midst of the Trump crumple, the New York Times put up a video of the idiot fringe of his supporters, filmed over the past year by Times reporters. These true believers seemed half crazed, disgraceful, barbaric. It was shocking to watch, and terrifying. Trump the candidate is a farce, but these people aren’t. They have always been with us, the racists and hatemongers; they have always, thankfully, been a minority. But they seem more threatening now. They are part of an international movement. They have their own self-reinforcing media, feeding them a diet of paranoid distortions. They are being prepared by the likes of Sean Hannity and Rush Limbaugh–and, of course, by Trump himself–for a “rigged” election that they will lose. And then what?

Trump may go away as a serious political force; he will find new business franchises to foist on the unwitting. But his followers will remain–and they will remain our fellow citizens, a slowly dwindling demographic force, more desperate in their diminution. We badly need to find a way to talk to them when this cataclysm of a campaign is over. 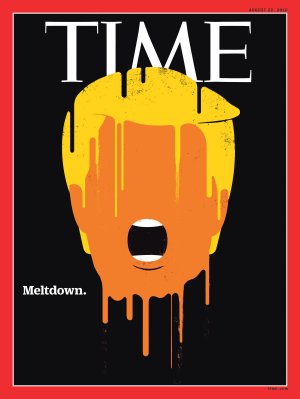