Muslim Women in the U.K. Are The Most Economically Disadvantaged

Muslim women walk in the foreground of the Suffa Tul Islam Central Mosque in the multicultural Bradford East constituency, where candidate Owais Rajput and his team canvassed ahead of May 7 elections in Bradford, England, on April 14, 2015.
Christopher Furlong—Getty Images
By Tara John

A new report has found that Muslim women are the most economically disadvantaged group in Britain, blighted by the highest level of unemployment compared to other religious and ethnic groups in the country.

Muslims, who make up 4.8% of the population of England and Wales, are more than two times likely to be unemployed compared to the general population. Women make up 65% of economic inactive Muslims, compared to 59% across all religions, says the report released by the House of Commons Women and Equalities Committee, a cross-party group of British lawmakers.

The report also found that traditional family practices affected Muslim women’s job prospects; 44% of all economically inactive Muslim women were not in work because they were looking after the home, compared to a national average of 16%.

The report says Muslim women looking for work or in employment also face a “triple penalty” of being a woman, part of an ethnic minority and being Muslim. It said Muslim women suffered the “impact of Islamophobia” on women’s job prospects, facing discrimination due to their beliefs, culture or clothing.

“We heard evidence that stereotypical views of Muslim women can act as a barrier to work,” the Committee Chair and Conservative Member of Parliament Maria Miller said in a statement. “The data suggests that in communities these patterns are shifting across generations but we remain concerned that this shift is happening too slowly and that not all Muslim women are being treated equally.”

The committee called on the government to roll out a plan to tackle these inequalities by the end of 2016. They also called for “name-blind recruitment” for all employers, following studies that suggest people with white-sounding names are more likely to get interviews. 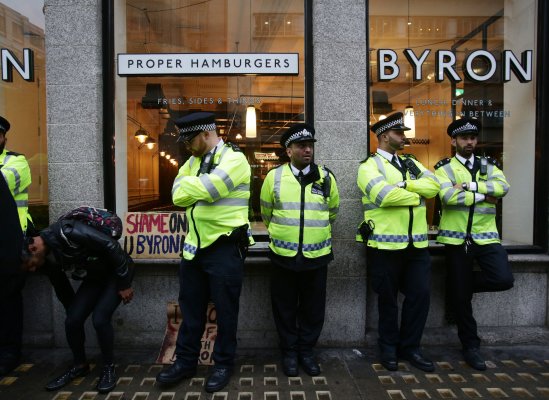 Why Protestors in the U.K. Are Targeting a Burger Chain with Cockroaches
Next Up: Editor's Pick