Laurence Griffiths ;Getty Images
Ideas
By Belinda Luscombe
Luscombe is an editor-at-large at TIME and the author of Marriageology: The Art and Science of Staying Together.

Simone Biles, the spring-laden gymnast who has torpedoed her way into American hearts during these Olympics, was raised by her grandfather and his wife after her mother’s drug addiction made it impossible for her to raise her youngest kids. Partly because of her grandparents’ careful nurturing, she became one of those athletes who come along just once in a generation, gymnastic’s Michael Jordan or Michael Phelps.

Of course, there can only really be one Simone. But data keeps suggesting that an increasing number of families are facing a situation like her grandfather and his wife faced when he found out Biles and her sister were in foster care—adult kids or grandkids who need a home. Census figures show that as of 2012, more than 700,000 kids are being raised by their grandparents alone.

And according to an analysis of Census data released by the Pew Research Center on Aug. 11, that figure is growing. A higher percentage of Americans live in a multi-generational household of some kind than at any time since the mid-1950s. The growth is evident across all racial groups, all age groups and among both men and women, although it’s slightly more marked among young men.

Most of those are not homes like Biles’ with just grandparents and grandkids—although 3.2 million Americans live that way. The vast majority of multi-generational homes are made up of adults 25 and older who live with their parents. Pew’s analysis suggests that the generational blending has grown noticeably even in the last two years, up from 18% to 19% of the U.S. population—more than 60 million people. It’s particularly marked among young adults; more Americans aged 18-34 are living with their folks than at any time in 150 years. Most eyebrow-raisingly, more than a fifth of all American 30- to 34-year-old men are living in their parents’ home.

Many such living arrangements sprang up shortly after the Great Recession started in 2008. But even as the ripple effects of the recession have faded, adult family members have continued to move in with each other, pushed together, experts suggest, by student loans, unemployment and the high cost of renting.

Among homes with just grandparents and grandkids, Biles’ family is in the minority. Most of the kids are white, 20% are Hispanic and 20% are black. Ron Biles and his wife Nellie, who adopted Simone, were able to afford what she needed; about half the homes with just grandparents are impoverished. And Simone had Ron; African American kids are about twice as likely to live with their grandmothers alone as to live with both grandparents. Kids with just a grandma are the most vulnerable; three quarters of them live in poverty.

Biles is a once-in-a-lifetime athlete. She has talent, determination and got some lucky breaks. Part of what makes her story so compelling is how unlikely it is; how much she has overcome to get there, how the statistics don’t apply to her. But the statistics are real. As more Americans live in circumstances that make success difficult, it’s hard not to wonder how many champions we are missing because their families need help. 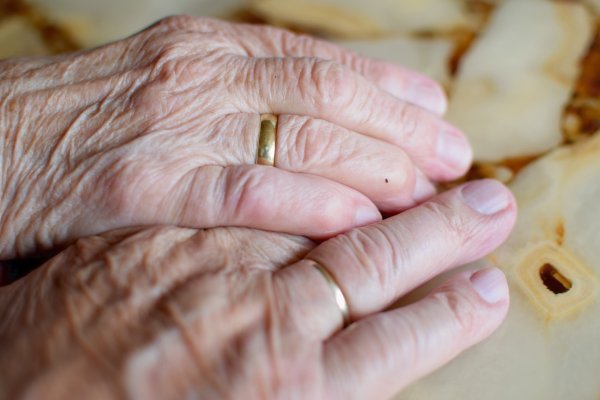 Couple Dies 20 Minutes Apart After 63 Years of Marriage
Next Up: Editor's Pick