RIO DE JANEIRO – Rio’s Olympic pool is certainly not slow. Nine world or Olympic records have already fallen, and fallen again, in Brazil, and the swimming competition at the Games is still only halfway done. But is it fast? Does the credit for those record-breaking performances lie with the Olympic athletes’ dedication, or the Olympic architects’ design?

Beijing’s Olympic pool was acclaimed for its speed eight years ago. “It’s by far the fastest pool in the world,” said Rowdy Gaines to NPR in August 2008. Gaines won three gold medals for Team USA in the pool at Los Angeles 1984, and now works as NBC’s swimming analyst. A total of 29 records were set in China. Four years later, at London 2012, just 19 new marks were set. Rio is currently on course to tie London, but with only 16 events left, cannot catch Beijing.

In London, 11 of the winning times were slower than in Beijing. Of the 16 gold medal times registered so far in Brazil, five are still slower than those from eight years back, despite any advances in sports science and coaching techniques that may have come since then. (The biggest improvements have come on the women’s side of the competition, where all of the times in Brazil have so far beaten those in China.)

“A fast pool typically has at least three meters of depth to it,” says Teri McKeever, head coach of the University of California’s women’s swimming team, and who served as the U.S. head coach at London 2012. “The deeper the pool is the better, because the splash or the turbulence and everything takes longer to get down to the bottom and then it doesn’t ricochet back up into the swimmers.”

Dampening out the movement of the water in the pool prevents it from disrupting the swimmers, and allows them to swim as fast as they can. When a pool is empty, “you really want that pool to look like a lake in the Midwest in the summer at six o’clock in the morning,” says Scott Hester, president of Counsilman-Hunsaker, a company that designs and operates aquatic facilities and designed the pool for Atlanta 1996. “You see no waves, no ripples, it’s completely still, it’s completely quiet.” If a pool cannot effectively dampen out disturbances when it is empty, and when the greatest disruption may come from the circulation system that brings in clean water, its surface is likely to become very choppy during a race.

Breaking records is good for business in the Olympic industry, but designing a pool that will all-but guarantee faster times than those that came before has become harder as specifications have become standardized. Early Olympic pools varied significantly in dimensions. Nowadays they are 50 meters long by 25 meters wide, and all three pools from Beijing onwards have been three meters deep.

Lane lines, buffer lanes, and gutters, however, can all play a role in dissipating waves. The lane lines act as wave breaks, reducing the ripples sent sideways out of each lane. Though the pool in Rio is 10 lanes wide, only the middle eight lanes are being used for competition, with a buffer on each side. That means the swimmers in the lanes closest to the sides are less likely to be impacted by waves reflecting off the walls. And if those waves do reach the edge of the pool, they flow outwards and into the gutters running along each side. Assuming the gutters have enough capacity to absorb these waves, they can prevent the water rebounding towards the middle of the pool.

“It’s a very good pool,” says U.S. women’s swimming head coach David Marsh of the competition pool in Rio. “It has almost all the stuff that you’d have in one. [But] the flat [end] walls make it a little bit slower because the waves come back off it, and the circulation’s being turned down to 50%. At [U.S.] trials we were down to 18%. Some things like that would help a bit. I think you can see that it has a hard time settling down—although it does.”

There are, however, many factors that play a role in setting faster times other than pool shape. Speedo’s LZR Racer bodysuits were launched in 2008, and used in Beijing, but FINA’s general congress voted to ban all body length swimsuits in July 2009 over concern that the suit was responsible for the spree of record-setting times. Since then, OMEGA has introduced a starting-block-like platform (making its Olympic debut in London) and an equivalent device called the backstroke ledge for in-water starts (Rio). Both of these allow swimmers to get more leverage off starts, projecting themselves faster and further down the pool.

The atmosphere outside the pool and inside the venue matters, too, because of the psychological effect it can have on competitors.

“I think it is a fast pool,” said American Connor Dwyer after winning bronze in the 200-meter freestyle on Monday. “It’s kind of like our trials pool: good energy in the stadium with no diving well in there. So you can definitely hear the noise in the surrounding pool.”

But pool design, venue architecture and technology innovation are still just part of what creates fast times at Olympic Games. “Yes, you want a good facility,” McKeever says, “but also I think it’s the competition, it’s the emotion and everything else that helps with those world records.”

“Personally I was just trying to go a best time and that happens to be a world record,” Ledecky said. “I think everybody builds towards this year and you want to swim your best at the Olympics so you don’t have any regrets about the four years you’ve been working.” 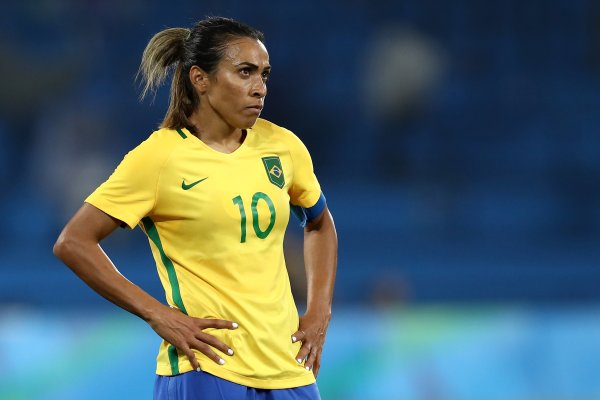 Brazilian Soccer Fans Are Making Their Own 'Marta' Jerseys
Next Up: Editor's Pick