Brazilian Soccer Fans Are Making Their Own 'Marta' Jerseys

Marta of Brazil looks on during the Women's Group E first round match between Brazil and Sweden on Day 1 of the Rio 2016 Olympic Games at the Olympic Stadium on August 6, 2016 in Rio de Janeiro, Brazil.
Buda Mendes—Getty Images
By Mahita Gajanan

After Brazil’s men’s soccer team failed to win its first two matches of the Olympics, local fans have taken to customizing jerseys of the team’s star, Neymar, by crossing out his name and replacing it with that of Marta, his counterpart on the women’s team. Both, conveniently, wear number 10.

The move is a protest as much as a celebration. Neymar is one of the biggest stars in soccer, and his addition to the Olympic squad was supposed to redeem a nation still reeling from its humiliating exit from the 2014 World Cup it hosted. But the men’s squad has performed poorly thus far, playing South Africa and Iraq to draws, and faces elimination Wednesday night if they lose against Denmark.

Meanwhile, the star Marta has led Brazil’s women’s team to two wins at the Games.But while vendors stocked up on Neymar gear, Marta jerseys are in shorter supply, Quartz reports. The solution for many fans has been to make their own:

Translated to English from Portuguese, the photo caption reads, “A picture is worth a thousand words.” 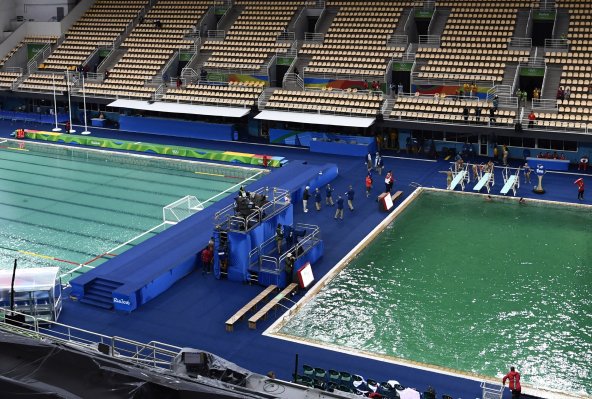 Now a Second Olympic Pool Has Turned Green
Next Up: Editor's Pick