What Makes Simone Biles Unlike Any Other Gymnast in the World

It’s hard to imagine now, just days after she led the U.S. women to their second-straight Olympics gymnastics team gold, but Simone Biles once got a zero on vault. Actually two zeros. The three-time world champion and practical shoo-in for the Olympic all-around gold on Thursday completely flubbed the event in which she now performs the world’s most difficult move.

Both naught scores were at the same event, and it wasn’t because Biles got nervous or hadn’t trained hard enough. The first time, she messed up because she was laughing so hard that she couldn’t even launch herself off the vault table and ended up sliding off into a giggling heap onto the mat. Her teammates had entered the arena just before her turn, and as she was running down the vault runway, they yelled “Run like a man!” Biles says couldn’t help herself. It was too funny.

She tried again, but to no avail. Still stifling the giggles, this time she bounced off the springboard in front of the vault and did her required twists and turns, but sprung so high that she never even touched the table. That’s an automatic zero.

Was Biles upset at her friends, or upset at her scores? “I didn’t care. I made it over the table and I didn’t know there was a deduction if my hands didn’t touch,” she says.

The stakes, of course, are much higher in Rio, but Biles’ attitude isn’t that different. Undeniably the world’s best gymnast, and arguably the most talented ever, she is also among the most outgoing athlete to ever grace the mats. While gymnasts are known for their stoic game faces and robot-like concentration, Biles can turn her focus on and off like a switch (well, save for those two vault flubs). In between rotations, as she’s waiting her turn to compete, she often waves to people in crowd and laughs with her teammates.

“Simone brings a bubbly personality,” says the steely U.S. national team coordinator Martha Karolyi. “In order to get to this level of gymnastics, not everything works out. Sometimes we have difficulty, but we have to push through. If you have a positive outlook, a bubbly personality like Simone, it is always a great contribution.”

In the individual all-around Thursday, Biles, 19, will likely compete as she has for the last three years — practically uncontested. Her routines are built with such difficult skills, and she performs them with such consistency, that she spends most of her competitions at least one point, if not several, ahead of the field. Her closest competition should come from teammate Aly Raisman, who qualified second and is hoping to capture the medal that she felt was taken from her when she missed a bronze at the 2012 Games when a tie breaker went against her. The last time the U.S. had two gymnasts on the podium in the event was in 2008, when Nastia Liukin and Shawn Johnson won gold and silver.

At her house in Spring, Tex., the world’s best gymnast is just another member of the family. Her maternal grandfather Ron and his wife, Nellie, adopted Biles and her younger sister, Adria, when Biles was five after her mother’s drug and alcohol addiction put the girls in foster care.

“To me it’s normal,” Biles says of her family. “When I was younger, I thought every kid was adopted because that’s all I’ve known. I have everything I need, so I never felt the need to have answers for what happened.”

But that family almost didn’t happen. While Ron says the decision to take in the girls was obvious — “we could not leave them in foster care” — it wasn’t easy. Before the adoption, the girls came to live with the Biles’ for about two years, and the stress of suddenly having to care for two young children pushed Nellie, who was working full time as a nurse, to the breaking point. Both of their sons had graduated from high school, and she and Ron were looking forward to being empty nesters when they suddenly started all over again. With their lives turned upside down by the demands of keeping up with youngsters day and night, Nellie broke down in the kitchen one night a few months after the girls arrived. “I was crying because I wanted to run away, and just leave everybody and just go,” she says. “I remember wanting to just really disappear from that family, because I was so stressed; everybody needed me.”

Ron was also torn: in order to adopt the girls, his daughter had to give up her parental rights. The Biles’ say that night was a turning point for them, when they realized that their lives would change, but for the better for both the girls and themselves.

Several years later, after the new family came back from the courthouse to make the adoption official, Biles called Nellie “mom” for the first time. “Before that, it was hammom, instead of grandmom,” she says. “And she said, ‘Hammom, can I call you mom?’ I’ll never forget that.” And in typical Biles fashion, she tried it out and started giggling. “She thought it was the funniest thing ever to call me mom.”

Now Biles is returning the favor. The night before the team competition in Rio, Nellie says she was more anxious than her daughter. “She comforted me,” Nellie says.

Once Biles leaves the gym, her family makes sure her life is as normal as possible. “After Simone won her first world championship, and she was getting all this recognition, she was getting a little big in the head because she was about that age,” says older brother Adam, one of Ron and Nellie’s grown children. “My mom told her, ‘we’re your family, not your fans; you don’t get any special treatment here.’ As her family, we’re her biggest supporters but we don’t goo goo ga ga over her like fans do. She still does the dishes and takes care of the dogs.”

They also encourage her to ‘Be Simone.’ It’s their way of minimizing the stress and pressure that’s been creeping like a fog into Biles’ life in the run-up to the Olympics. Allowing their daughter to be herself has proven to be the best way for her to manage the anxiety. Karolyi had to learn that the hard way since she’d never seen a gymnast as gregarious as Biles before. “She told me, ‘Simone, you’re looking all over the place and you need to stay focused so you don’t get distracted,’” says Biles. “She was like, ‘Tone it down a bit.’ I don’t think she knew that was me in my zone.”

(Read More: The Olympic Gymnast Who Overcame a Drug-Addicted Mother)

Biles in the Gym

The soundtrack to training sessions at the suburban Houston gym that her parents own is Biles providing a running commentary on what’s going on in her life. Her longtime coach Aimee Boorman knows that when the chatting stops, something is wrong. “If she is not sharing story with me, or showing me a video, or talking about something in social media, then I know something is weighing on her mind,” says Boorman.

Boorman has been Biles’ only coach since she was eight years old, after her mother, also a gymnastics coach, spotted the then-six-year old’s power and called her daughter over to see. Boorman took Biles on two years later, and the pair have learned together what it takes to be an elite gymnast.

It helps that Biles is also just an hour away from the Karolyi ranch, which doubles as the U.S. team’s national training center. That proximity proved critical three years ago, when Biles was struggling to make the leap to the top tier of gymnastics. In 2013, Boorman had to pull Biles out of her first senior level meet because Biles was so overwhelmed that she fell on every event. Karolyi invited Biles, then 16, to the training center, and gave her a dose of tough love. The message was simple: focus on your talent, not your failures.

Biles hasn’t lost an all-around competition since. Don’t expect that streak to end in Rio. 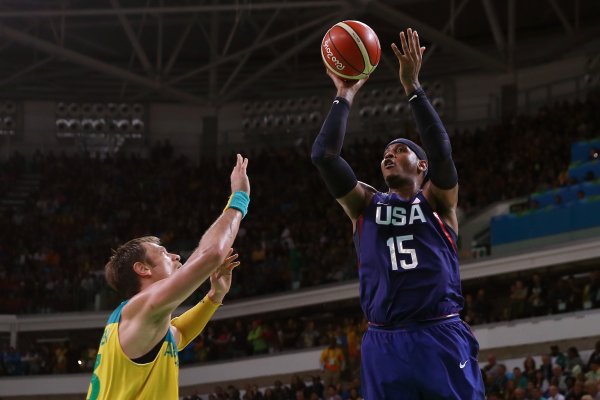