Democratic Senate candidate Ted Strickland has apologized for a comment he made about former Supreme Court Justice Antonin Scalia. During a Monday campaign event in Cleveland, Strickland, Ohio’s former governor, had said Scalia’s death “happened at a good time” because of pending court decisions.

In a video posted by NTK Network on YouTube, Strickland is shown speaking to AFL-CIO members about how Supreme Court rulings on labor laws could affect America’s labor unions.

“My friends, a lot of average citizens out there don’t understand the importance of that court,” he said in audio released by the network. “I mean, the death of Scalia saved labor from a terrible decision. And I don’t wish anyone ill, but, it happened at a good time! Because, once that decision had been made it would have been tough to reverse it.”

Through a spokesman, Strickland apologized. “That was an insensitive comment and I apologize,” Strickland said in a statement.

Strickland’s comments related to Supreme Court decisions earlier this year. In March, the Court deadlocked 4-4 in favor of labor unions in a decision that would have crippled public sector unions if it had gone the other way. Prior to his death a month earlier, Scalia was expected to vote against the union position.

Scalia’s death in February left the Court split 4-4 between conservative and liberal justices. Scalia was a justice loathed by liberals and loved by constitutional conservatives, and his death has become an issue in the presidential election. Both Donald Trump and Hillary Clinton have tried to rally supporters by saying the other cannot be allowed to swing the balance of the court. On Tuesday, Trump faced criticism for saying “Second Amendment people” may be able to do something about Clinton’s appointments of justices if she is elected.

Strickland was seen as a possible vice presidential pick for Barack Obama in 2008. Strickland lost his gubernatorial reelection campaign in 2010 to Ohio Gov. John Kasich. The former Ohio governor has been a staunch Hillary Clinton supporter and is in a tight race against Ohio Republican Sen. Rob Portman. 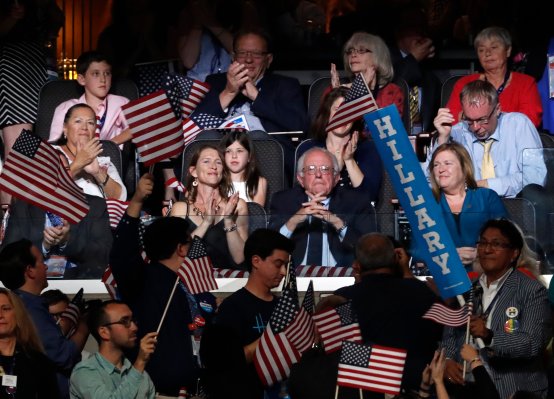 Bernie Sanders Is Still Trying to Stick It to Former Democratic Chair Debbie Wasserman Schultz
Next Up: Editor's Pick