At the Rio Olympics, the swimming pool has been a veritable breeding ground for some friendly (and not-so-friendly) rivalry.

Chief among the games’ drama has been the competition between the most decorated Olympic athlete of all time, Michael Phelps, and South African swimmer Chad le Clos, which came to a head when Phelps blew le Clos out of the water to win his 20th gold medal for the 200-meter butterfly final — the same event that le Clos beat Phelps in for a gold during the 2012 games in London and, incidentally, was also the start of Phelps and le Clos’ feud, which we’ve handily outlined in chronological order below.

July 2012: Chad le Clos beats Michael Phelps by five hundredths of a second at the 2012 London Olympic games during the 200-meter butterfly race. After the games, Phelps announces his retirement.

April 2014: Phelps comes out of retirement to compete in his first meet since leaving the sport; significantly, he does not compete in the 200-meter fly, saying that he would never enter the race again.

May 2015: Phelps has a change of heart and competes in the 200-meter fly at the Arena Pro Series, telling reporters that the times that competitors have been clocking in the event are “really not that fast.”

August 2015: After winning the 100-meter fly at the 2015 FINA World Championships, Le Clos had choice words about Phelps. “Michael Phelps has been talking about how slow the butterfly events have been recently,” he said. “I just did a time he hasn’t done in four years. So he can keep quiet now.”

Later that day, Phelps beat le Clos’ time in the 100-meter fly at the Phillips 66 National Championships and responded to le Clos’ statements. “There are a lot of things I could say. But I won’t,” he said. “I’m going to let what I do in the pool do my talking.”

Le Clos and his father, however, answer with more sports analysis; le Clos states, “I’m just very happy that he’s back to his good form, so he can’t come out and say, ‘Oh, I haven’t been training,’ or all that rubbish that he’s been talking,” while the elder le Clos told the AP that he was confident that Chad would beat Phelps. “However fast Michael goes, we go faster. I don’t care about his times, because I know my son is going to beat him.”

November 2015: In an interview with Sport 360, le Clos reveals that he was hurt by the rift with Phelps, but also takes the opportunity to throw shade at his opponent. “If I was as great as he was, I would conduct myself in a way children would be proud of…I thought I was good friends with him, clearly not. I don’t think he likes me very much.”

August 2016: Phelps and le Clos meet again in Rio, where spectators are equally bemused as they are intrigued by le Clos shadow boxing and dancing before the preliminary race as Phelps glowered in a corner, giving us the meme of the Olympic games, heretofore referred to as #PhelpsFace. Phelps went on to beat le Clos in not only the preliminary heat, but also in the final race, which basically gave the Internet license to wild out and turn le Clos into the equivalent of the Rio games’ Crying Jordan treatment, from changing his Wikipedia page to zinging him with memes and hot takes on Twitter.

One fan saw that the Internet was already revising history for le Clos.

Others chose to capitalize on the moment when le Clos saw that he was getting beat.

The Internet also made good use of #PhelpsFace in this moment.

Meanwhile, others chose to stick to the Classic Crying Jordan face for the occasion.

Welcome to being athletes in 2016. 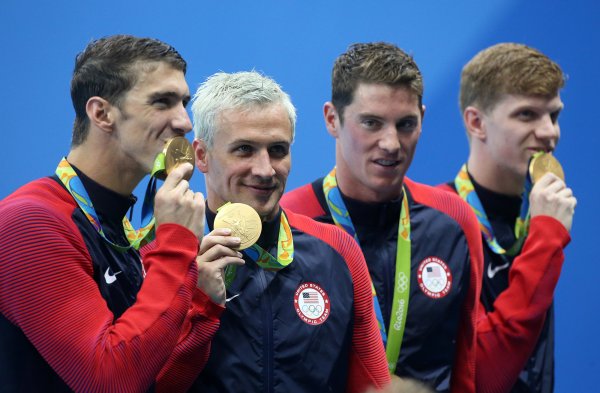 Ryan Lochte Broke the Number One Rule for Platinum Blonds and Turned His Hair Green
Next Up: Editor's Pick