When you’re the best in the world, people notice. Even big-time celebrities. So when the Team USA women’s gymnastics squad — made up of Aly Raisman, Gabby Douglas, Simone Biles, Laurie Hernandez and Madison Kocian, and henceforth known as the “Final Five” — handily secured their team gold on Tuesday with a series of flawless performances, they started receiving a whole lot of love from some pretty famous names via Twitter. They’ve been quick to respond to many of these stars, too, inviting them to hang out, asking to party together and building the groundwork for some very high-wattage friendships. (But even Simone Biles got a little starstruck by Zac Efron — proving that the champion still is human after all.)

There were shout-outs from the Hollywood stars, pop-culture celebrities and American legends:

TV and social media personalities and newscasters added to the mix:

And, of course, their fellow athletes, both those watching from home and those also competing at the Olympics:

Including their fellow gold-medal gymnasts from 2012’s team competition…

… and Nastia Liukin, Shawn Johnson East and Kerri Strug, the wunderkinds of 2008 and 1996.

Even politicians gave them their regards. Like Sen. Tim Kaine, the Democratic vice presidential nominee.

Looks like the Final Five are going to have no shortage of famous friends in high places when they get back to the U.S. 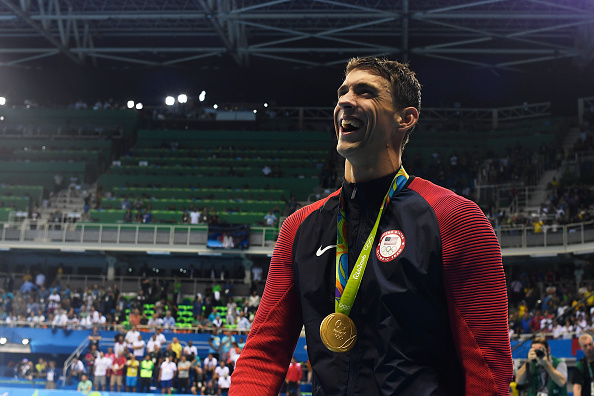 The Reason Michael Phelps Was Laughing During the National Anthem Will Make You Smile
Next Up: Editor's Pick