Why Protestors in the U.K. Are Targeting a Burger Chain with Cockroaches

Byron workers held. Police officers stand outside a Byron restaurant in Holborn, central London, as people protest after dozens of workers at the burger chain were arrested in a swoop by immigration officials, on Monday August 1, 2016
Yui Mok—PA Wire/Press Association Images
By Kate Samuelson

An inoffensive high street restaurant offering double bacon cheese hamburgers, bean patties and cobb salad is not somewhere you’d expect to be targeted by a mass of vitriolic Brits.

But the U.K.’s popular Byron chain has faced the wrath of thousands after it collaborated with the Home Office in the arrest of 35 of its migrant workers from a dozen London branches on July 4, on suspicion of immigration offences. Around 25 of the workers have since been deported, according to the Guardian.

The move sparked a summer of protests across the country, including in London where thousands of live cockroaches, locusts and crickets were released into two of Byron’s 56 branches. A London-based protestor who asked to remain anonymous said more such acts are still to come. “I’m sure there will be further protests,” he told TIME. “I feel like this isn’t going to go away.”

Raiding restaurants, hotels and other service industries is a familiar tactic used by immigration authorities both in the U.K. and the U.S, where the Obama administration has deported more than two million people over the past eight years.

However, protestors and labor unions say the tactics utilized by Byron’s managers were uniquely deceitful. The managers reportedly lied to their employees by calling them into work under the guise of a meeting about the dangers of medium and medium-rare burger cooking – where they were then questioned by up to 12 officers.

“It seemed a bit weird,” one victim of the sting told The Guardian. “Waiters and others have meetings but not kitchen staff. We were waiting for about half an hour. Then, about 20 minutes later, four or five immigration officers appeared and said we had to stay where we were while they asked about our nationality and who we were.”

All of the activists TIME spoke to were confident that more demonstrations, both peaceful and otherwise, are to come in the fall — and that Byron could be one of many. “Companies like Byron that are complicit in this need to be shamed, and other companies need to be dissuaded from acting like Byron did,” the anonymous protestor continued. “We need to resist a shift towards the far right.”

Although this protestor was not actively involved in the release of the insects, inspired by former U.K. Prime Minister David Cameron’s description of migrants as a ‘swarm’ when speaking to a news channel in 2015, he felt they were critical in causing damage to the chain’s reputation and dissuading other restaurants from following Byron’s example.

Other activists weren’t so fond of the tactic. Vlogger Ash Sarkar used Twitter to condemn the ‘swarm’ of bugs, noting that the employees would not only have to clear up the mess but could also be brought into unwelcome contact with the police.

But Mark Johns, a member of activist group Fight Racism! Fight Imperialism!, who helped organise a protest in Newcastle, felt it was an understandable move to get media attention. “Because of the way migrants are treated and because the government aren’t listening, people don’t feel they have any outlet in order to change things,” he told TIME. “More direct action – action to get the attention of press – is perfectly legitimate. And [the insects] worked, it did get a lot of attention and a lot of people know about these issues now because of it.”

Others say Byron’s managers were left with no choice but to comply with the Home Office’s orders. “Immigration would have [still] come in, acting on a tip off,” immigration lawyer Harjap Singh Bhangal said, in an interview with the UK’s Talk Radio. “[Byron Burgers] were put in a corner, with a fine of potentially £750,000. They had no choice but to cooperate.”

The chain itself released a statement claiming they were unaware that any workers were in possession of counterfeit documentation until the Home Office brought it to their attention, “despite carrying out rigorous ‘right to work’ checks”. “We have cooperated fully with the requests of the Home Office throughout this investigation,” the statement said. At the time of writing, Byron has not responded to TIME’s request for a comment.

Ewa Jasiewicz, an organizer with Unite, the U.K.’s biggest labor union for hotel and restaurant workers, says that the Byron protests should make other employers think twice about how they deal with requests from immigration officials. “They will go down as a business which snared and tricked their workers,” she told TIME. “Other restaurant and hotel chains may follow the same path to avoid hefty Home Office fines, but hospitality businesses now have to weigh up the consequences of pursuing an entrapment model: consumer boycott, reputation damage, protests and bad publicity.”

Whether bad publicity has impacted Byron’s bottom line remains to be seen; a branch in London’s Waterloo Wednesday evening was packed with people as usual. More protests, however, could bring more unwelcome swarms to the popular chain. 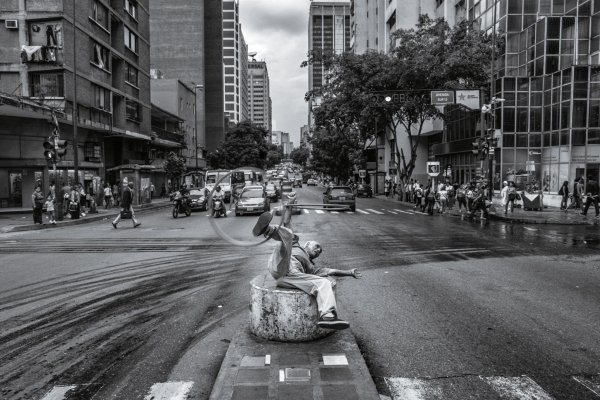 Requiem for Venezuela
Next Up: Editor's Pick