Is It Really Fair to Call Chinese Swimmer Sun Yang a Drug Cheat?

Sun Yang of China celebrates winning the gold medal in the men's 200-m freestyle on day 3 of the Olympic Games on Aug. 8, 2016, in Rio de Janeiro
Jean Catuffe—Getty Images
By Charlie Campbell / Beijing

A slip of the tongue? Australia’s Channel Seven commentator Amanda Abate claimed so after she referred to Olympic gold medal-winning swimmer Sun Yang as “one of China’s cheats” instead of, presumably, “stars.”

“I definitely didn’t mean that, but look everyone, it is a talking point,” Abate added.

It certainly is. Sun has been facing mounting criticism at the 2016 Rio Games after Australian gold medalist Mack Horton repeatedly slammed him as a “drug cheat,” and then French swimmer Camille Lacourt said the 200-m freestyle champion “pisses purple” in reference to an earlier failed drugs test. “When I see the 200-m podium, I want to be sick,” said Lacourt.

To be sure, Sun was banned from competition in 2014, but it was for only three months and for a proscribed substance, trimetazidine, that had been prescribed for angina, a heart condition. When Sun took the drug, it had been on the World Anti-Doping Agency’s list for less than five months, and today is no longer recognized as a stimulant by doping agencies.

Sun’s history of heart trouble is also well documented. It forced his shock withdrawal from the 1,500-m freestyle final at the world swimming championships in 2015.

For these reasons Sun’s team has been steadfast in defending their champion.

“We are aware of the harsh criticism from Australian swimmer Mack Horton, and the personal attack on Sun Yang. We think his inappropriate words have greatly damaged sporting ties between China and Australia, and damaged the image of Australian athletes,” read a statement from the Chinese Swimming Association. “These comments lack manners, and we strongly ask that Horton apologize.”

Chinese swim team manager Xu Qi on Sunday went so far as to question Horton’s upbringing. “We think his inappropriate words greatly hurt the feelings between Chinese and Australian swimmers,” he said. “It is proof of a lack of good manners and upbringing.”

Horton has reportedly since admitted that he was trying to psyche out his opponent with the “drug cheat” taunt.

Sun is the first Chinese swimmer to win an Olympic gold and the 24-year-old remains hugely popular in his homeland, where he has 29 million followers on the popular microblog Weibo — more than Australia’s entire population. Some fans have even taken to trolling Horton, calling him “snake” and “ugly” among other obscenities.

“A real warrior will face up to malicious vilification,” posted one user on Weibo. “Sun Yang, you have perfectly demonstrated Chinese virtues to the world. Slanderers failed to distract you by spreading rumors. You are the pride of China, and a role model for the world.”

He is also no stranger to controversy. In 2014, he spent a week in jail after crashing his car into a bus while driving without a license. His excuse wasn’t exactly watertight: “Because I have been focusing on training and competition, I had only a hazy knowledge of the law, which led to my mistake,” he said.

Correction: The original version of this story has been edited to reflect that trimetazidine is no longer considered a stimulant 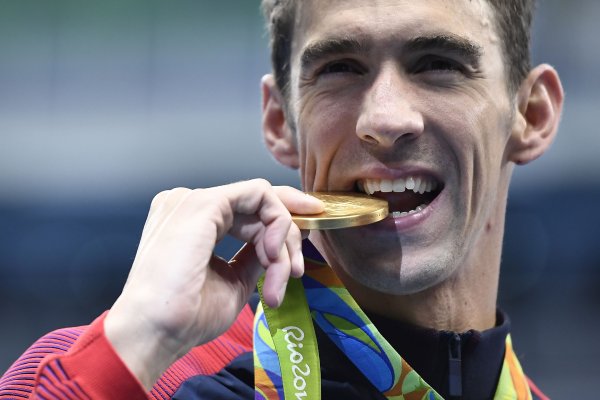 Social Media Is Full of Love For Michael Phelps
Next Up: Editor's Pick