Bubba Watson of the United States attends a press conference at the Main Press Center during Day 4 of the Rio Olympics on Aug. 9, 2016 in Rio de Janeiro.
Cliff Hawkins—Getty Images
By Sean Gregory/Rio de Janeiro

Bubba Watson, the highest-ranked American golfer at the Olympics, defended Justin Gatlin‘s right to compete in Rio, telling TIME that the sprinter who was once suspended for a doping violation is clean and has “changed.”

“Who cares about the past?” Watson tells TIME. “I mean, we’ve all had issues. People write negative things about me that aren’t true.”

Gatlin, a gold medal winner at the 2004 Olympics, was out of the sport for four years following a positive test. He denies knowingly taking steroids and has since come back in spectacular fashion, emerging as a threat to topple Usain Bolt in the 100-meters, even at age 34. But the question of whether athletes with a history of doping should be allowed to compete has taken center stage in Rio following the July disclosure of Russia’s state-sponsored conspiracy to defraud anti-doping authorities. During the Games, a number of swimmers called out rivals who had served doping suspensions as drug cheats, and American swimmer Lilly King suggested that Gatlin and others shouldn’t be allowed back into the Games.

Watson, however, thinks Gatlin has earned his way back into the Olympics. “What he did, true of not, I don’t care about that,” Watson says. “He’s changed.”

The world’s sixth-ranked golfer is excited for Gatlin’s showdown with Bolt–but he’s also looking forward to soaking up the Games like any other Olympian. Among his plans: the McDonald’s in the Olympic Village, which is free for athletes, and watching Denmark’s handball squad. “He’s telling me about the team,” Watson says while glancing at Jens Beck, his Danish manager, “and how this guy with long hair is the greatest of all time.”

The message to his fellow top male golfers is clear: you’re missing out. Indifference has marred golf’s return to the Olympics for the first time since the first Roosevelt administration, with the world’s top four players and many of its other big names opting not to play in the four-day, stroke play tournament, which begins Aug. 11. They’ve cited reasons ranging from security risks to overscheduling to the threat of Zika. The women’s tournament, which starts on Aug 17, features almost all the world’s best players

Watson says he respects the decisions of his fellow pros, especially those who said they feared contracting Zika, which can be transmitted sexually and cause serious birth defects. “If you could have kids, and you’re planning on having more kids, then yes, it’s very scary,” says Watson. “So you can’t down an athlete for not coming.”

Watson has two adopted children with his wife, Angie, a former University of Georgia basketball player who told him on their first date that she couldn’t conceive children. Though Watson says that even if the pair could conceive children, he would have followed recommended health guidance and waited until well after the Olympics to start or expand a family. Angie, who missed a spot on Canada’s Olympic team in 200 because of a knee injury, encouraged Watson to go to Rio, not wanting him to miss out like she did. “Luckily I have an athlete as a wife so she gets it,” he says.

In the lead-up to the Olympics, Watson talked to golfers like Spieth and Rickie Fowler, who wound up making the trip (along with fellow Americans Matt Kuchar and Patrick Reed) about joining him in Rio. “Rickie was very fearful, he’s a young guy,” says Watson. “I mean nobody knows, all we’re getting is headlines. I said, ‘Rickie, I’m telling you, you’re going to miss out.’ Jordan. I told them all. They said, ‘Bubba, why are you so excited, why is it not even a doubt?’ I said, ‘it’s the Olympics, man. To be called an Olympian, no matter how I do in my event, it means everything. This is why we play sports. To make it to the pinnacle.”

Watson knows that feeling, having won Masters titles in 2012 and 2014. He can’t say if a gold medal would mean more, since he hasn’t set foot on a podium. But Watson, who became highly emotional after both Masters victories, promises some tears. “I’ll probably cry for bronze, let’s be honest,” he says.

Despite the thin field, Watson will have competition, especially from Sweden’s Henrik Stenson, who is fresh off a British Open win and the only player ranked higher than Watson. And then there are the giant rodents, called capybaras, hanging around the course. But he’s trying to treasure his Olympic ride–since it may be his first and last.

The paltry turnout from the big names has put golf in jeopardy of being kicked out of the Games after Tokyo 2020. “If they take golf away, at least I’m here this year,” says Watson. “The people that are still young and already missed out, now they’re going to miss out for life.” 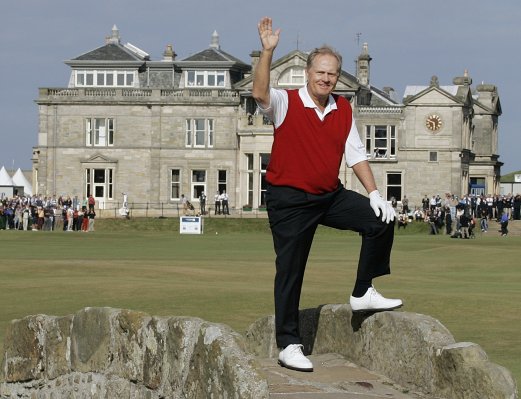 Jack Nicklaus Remembers Playing Golf With President Ford: 'He Was a Wonderful Man'
Next Up: Editor's Pick