The death of a 10-year-old Kansas boy, who was decapitated on the world’s tallest water slide over the weekend, has revived calls for change in the amusement park industry, which advocates say lacks federal oversight and data tracking.

Caleb Schwab was killed Sunday while zooming down the 168-ft.-tall Verruckt water slide at the Schlitterbahn water park in Kansas City, police said. Details surrounding the death remain unclear, but advocates say the tragedy points to flaws in the industry that may put young thrill seekers at risk.

“Something more has to be done. We owe it to this child’s family,” said Nancy Cowles, executive director of Kids in Danger, a nonprofit that works to improve safety related to children’s products. “You can’t have a 10-year-old at a well-known amusement park be suddenly killed on a ride … and not think we need to do something more.”

And Caleb’s death was not the first injury at Schlitterbahn, according to the nonprofit Amusement Safety Organization, which has been tracking self-reported amusement ride injuries nationwide since 2000. Three other guests had previously reported injuries they say they sustained at attractions in Kansas’ Schlitterbahn location: A 29-year-old woman said she hurt her upper back on the world’s tallest water slide last year and blamed her restraint strap, which she said was too tight; another 22-year-old woman complained of a neck injury after riding the Storm Blaster water coaster in 2011; and a 43-year-old man said he hurt his left ankle when he accidentally hit it against the side of a wall on the Dark Knight tube slide in 2012, the nonprofit said.

Like other amusement and water parks in Kansas, the state’s Labor Department allows Schlitterbahn to perform its own safety inspections using inspectors licensed by the National Association of Amusement Ride Safety Officials (NAARSO), according to Barbara Hersh, a Labor Department spokeswoman.

Hersh said in a statement to TIME that the department has the power to conduct random inspections of the water park’s records and certificates of inspection but did not say whether Labor officials had done so before Caleb’s death.

The Labor Department has requested Schlitterbahn’s inspection paperwork after the tragedy “to ensure all safety requirements have been followed,” Hersh said. It’s unclear when the last inspection was conducted and what it found.

Schlitterbahn spokeswoman Winter Prosapio declined to answer questions on inspections, saying the incident is under police investigation. All rides at the water park are inspected daily before opening, Schlitterbahn said in a statement.

Each year, about 335 million people go on 1.6 billion rides at 400 U.S. amusement parks, according to figures provided by the International Association of Amusement Parks and Attractions (IAAPA). And more than 85 million people visit water parks in the U.S. annually, the group said, adding that fatal injuries are “extremely rare.”

The IAAPA puts the chance of being seriously injured on a permanent amusement ride at a U.S. amusement park at 1 in 16 million.

There are no available national statistics for water park injuries, which Cowles, the Kids in Danger advocate, said is a major problem in the industry.

The Red Cross last year cited U.S. Consumer Product Safety Commission estimates that more than 4,200 people a year are taken to emergency rooms to be treated for scrapes, concussions, broken limbs, spinal injuries and other such injuries sustained on public waterslides, according to the Associated Press.

The commission oversees traveling amusement parks in the country—including pop-up carnivals—but it does not have jurisdiction over water parks in permanent locations. The commission declined to comment and did not provide updated public waterslide injury figures on Tuesday.

Advocates said the lack of federal oversight means issues with water park regulation aren’t limited to Kansas. Regulations vary by state—some let the amusement parks handle safety internally, while others leave responsibility up to county or state-certified inspectors, according to Jason Herrera, director of the Amusement Safety Organization, which has been tracking amusement ride injuries nationwide since 2000.

“They need to bridge that gap,” he said. Herrera encouraged federal oversight, but said such a program would be expensive and would be unwelcomed by the amusement park industry. “I don’t see it ever coming into fruition.”

Caleb was one of three passengers strapped into a raft that descended Verruckt, which means “insane” in German. The Guinness World Record-certified ride opened in 2014.

Caleb was decapitated in the accident and was found dead at the bottom of the ride in a pool, police told TIME on Tuesday. The two other passengers both suffered minor cuts and scrapes on their face in the incident, according to authorities.

The two to three Verruckt riders per raft, who must weigh a combined 400 to 550 pounds, are shot down a 17-story drop before they are “blasted back up a second massive hill and then sent down yet another gut wrenching 50 foot drop for the ultimate in water slide thrills,” the park’s website says.

Riders have to be at least 54 inches tall to ride Verruckt, and they’re strapped across the waist and shoulders as their raft reaches speeds of 60 to 70 mph, the Kansas City Star reported shortly after its opening.

Mayor Mark Holland of the Unified Government of Wyandotte County, who was interviewed by the newspaper at the time, compared the experience to “dropping out of the sky.”

“It’s terrifying and horrible and terrific,” Holland said in 2014.

Verruckt is closed for the rest of the season, the water park said Tuesday. Authorities are looking into what prompted the deadly accident.

“It could have been a freak accident, but that’s very rarely the case,” Cowles said. “Parents are assuming their kids are safe, and we need to make sure that they are. This incident shows that we need to improve.” 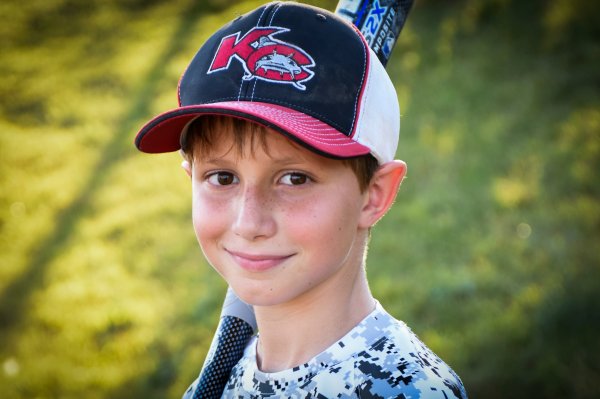 Hundreds Donate Money for Funeral of Caleb Schwab, 10, Decapitated on Water Slide
Next Up: Editor's Pick