Tom Hiddleston Joins Instagram By Announcing Loki Is Back

Tom Hiddleston joined Instagram Tuesday, sharing his first photo ever — a selfie in character as Loki on the set of Thor: Ragnarok.

Hiddleston will return to his role as the maniacal Thor villain with a mean case of sibling envy in the movie, opening in November of next year. The 35-year-old actor, who is filming the third installment of the franchise in Australia, captioned the photo with an ominous but excited “He’s back!”

At a Wizard World Philadelphia panel, Hiddleston was buzzing with excitement to be playing Thor’s brother again, who he says has evolved since fans saw him last. “What I’m interested in really is how his attitudes have changed. I’m four years older and Chris [Hemsworth] is four years older, and there will just be new things we find in it. The most exciting thing about him is that he is always a trickster. It is trying to find new ways for him to be mischievous, because I love doing that, and I hope you guys love within that.”

Hiddleston has 242,000 followers so far who are feeling the “love within,” and he isn’t following anyone yet. 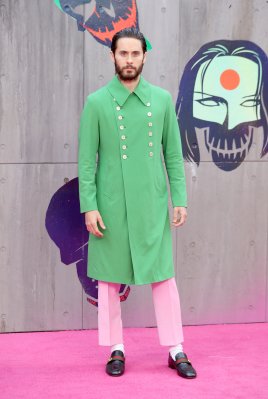 The Internet Is Thoroughly Enjoying Jared Leto’s Green Jacket
Next Up: Editor's Pick