These Olympic Grandmas Are the Real Rio 2016 Winners

It takes a lot of blood, sweat, and tears to reach the levels of athleticism that qualify you to compete as an Olympic athlete. It also takes a lot of energy and passion to be a supporter of the Games, especially if you’re a grandparent of one of the athletes. Your job? Enthusiastic cheering. Your fate? To go viral.

Let’s take a look at three amazing women who may not be playing a sport this summer, but are still making a mark on this summer’s events in Rio.

First up: American swimmer Ryan Lochte’s grandma is no stranger to having a winning grandson. After all, he was a major medal-winning sensation in 2012. Now 95, she’s still keeping the Olympic spirit alive. She celebrated from her nursing home in the U.S., carrying a makeshift Olympic Torch as she led a procession. “Representing #USA,” grandson Lochte said of his devoted grandma. Naturally, Lochte’s fans went wild, retweeting the video nearly nine thousand times.

The Internet has also gone wild for British swimmer Adam Peaty’s social media-savvy grandmother, who has been tweeting up a storm in support of her 21-year-old grandson. Peaty won Great Britain’s first gold medal of the games in the 100-meter breaststroke over the weekend. The 74-year-old has christened herself “#OlympicNan,” and denizens of the web have become so enamored with her earnest messages to the athlete (and expert-level use of emojis) that even Google itself sent her a tweet in recognition.

(She sent out a sportsmanlike shoutout to Lochte’s grandma, too, after seeing the video that Lochte had posted.)

Finally, Brazil has its own “extreme granny.” At 106, Aida Gemanque — who goes by Grandma Iaiá — is the oldest person in Olympic history to carry the Olympic torch, which she did in June in the Brazilian region of Macapá. She’s called the “extreme granny,” though, for a different reason: just three years ago, she solidified her status as a bona fide daredevil when she became the world’s oldest skydiver (a title verified by the Guinness Book of World Records).

Age is no limit for these women to contribute to the spirit of the Games. 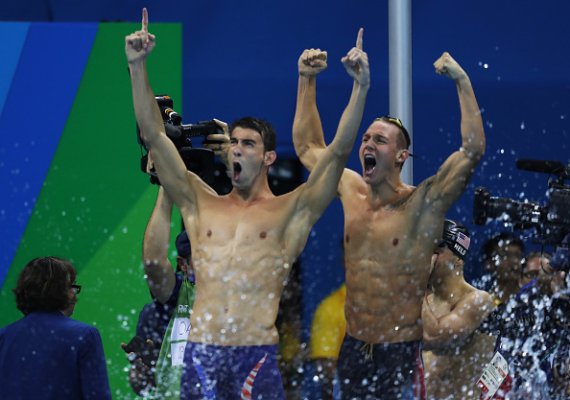 Michael Phelps Celebrating His Olympic Gold Medals Will Give You All the Feelings
Next Up: Editor's Pick