Dwayne “The Rock” Johnson took to Instagram to call out his male co-stars from Fast and Furious on Monday.

The action star, who will appear in the eighth installment of the endless Fast and Furious franchise praised the crew and his female co-stars, which includes Helen Mirren and Michelle Rodriguez, before he singled out a selection of unnamed male co-stars for being cowardly, in so many words.

“This is my final week of shooting #FastAndFurious8,” Johnson wrote. “There’s no other franchise that gets my blood boiling more than this one.”

He then went on to explain why fans will notice that his blood is “legit boiling” in scenes in the movie, which will come out in April.

“My female co-stars are always amazing and I love ’em. My male co-stars however are a different story. Some conduct themselves as stand up men and true professionals, while others don’t,” Johnson continued. “The ones that don’t are too chicken s–t to do anything about it anyway. Candy a–es.”

His male co-stars include Vin Diesel, Scott Eastwood, Chris “Ludacris” Bridges, Kurt Russell, Lucas Black and Tyrese Gibson, none of whom he named. 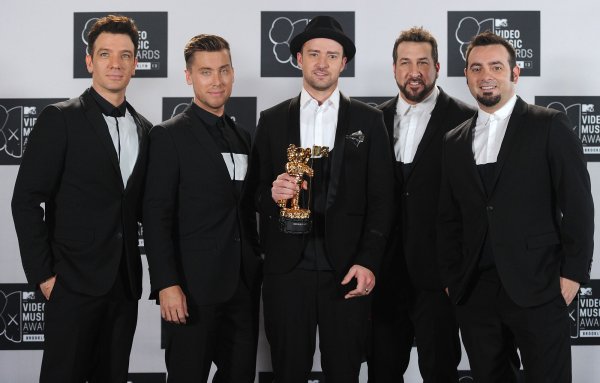 This *NSYNC Reunion Photo Is Every Boy Band Lover's Dream
Next Up: Editor's Pick