Kosovo's First Ever Olympic Medalist on Her 'Great Moment'

Kosovo’s first medal-winning athlete at an Olympic Games has spoken of her delight and pride at making history in Rio de Janeiro.

“It was a great moment, one I always dreamt about, but I still cannot believe that it happened,” Majlinda Kelmendi told TIME after winning a gold medal in judo. “In Kosovo, I have seen that everyone is celebrating. I can’t imagine what kind of celebrations there will be when I come home.”

Born in Peć, a city in western Kosovo, the judo champion is among the first athletes to compete in the name of the disputed territory, which was recognized as a sovereign state by the International Olympics Committee (IOC) only two years ago having declared independence from Serbia in 2008.

And if being her nation’s first flag bearer at the opening ceremony last Friday wasn’t a defining enough moment, the 25-year-old Kelmendi went on to win the country’s first Olympic medal, gold or otherwise, after beating Italy’s Odette Giuffrida in the final of the women’s 52 kg event on Sunday.

“My family are very happy and I have enjoyed making them proud, especially my parents,” she said. “For a long time Kosovan athletes did not have the opportunity to represent our country, so it’s great that on the first Olympics we got gold.”

Kelmendi, who like the majority of people in her country is an ethnic Albanian, chose to join the Albanian team ahead of the 2012 games but did not make it through to the medal rounds. She doesn’t feel a conflict between the two, she said. “We are the same people as Albania. So competing for them back then and for Kosovo means I have represented my people always.”

The IOC eventually decided to accept Kosovo as a member at the end of 2014, meaning Kelmendi could compete under its flag. It wasn’t a wholly popular decision; more than 80 U.N. member states, including China, Russia and the 2016 Games’ host country Brazil, are still opposed to its independence from Serbia and refuse to acknowledge it as a sovereign state.

Serbia is still unhappy about it; Yahoo reported that Serbian officials told their athletes not to share any medal stands with Olympians from Kosovo while competing in Rio. However, no Serbians competed in the judo event that Kelmendi won.

She appears to still have the support of the Albanian people, with local news outlets praising her “historic achievement” and for “writing gold history“. Perhaps unsurprisingly, the coverage of her achievement in Serbia was limited.

When asked what’s next for her, Kelmendi said that she’s looking forward to participating in the Tokyo Games in 2020 but when her career is over she wants to work with younger generations of athletes, to “try to show them the beauty of our sport”.

“Training for the Olympics is hard,” she added. “I have been training every day for four to six hours for many years – but I have seen that my work pays off. I want to get all that is possible out of my career, and will continue to work hard.” When asked about Kelmendi’s achivement, her longtime coach, Driton Kuka, said he felt like he was in a “dream.”

Reports released today may have slightly dampened her winning spirit. The UK’s Guardian newspaper reported that Kelmendi refused an unscheduled, out-of-competition urine test conducted by the French anti doping agency (AFLD) on June 16. The refusal could see her banned from competing there, igniting a fresh scandal about doping at a Games already overshadowed by the issue.

Agron Kuka, Judo team leader for the Kosovan Olympic team, has dismissed the controversy and insists Kelmendi is clean. “The person involved, she didn’t have any authorisation from Wada [the World Anti Doping Agency] or anyone,” she said. “The Kosovan team were in discussion with the International Judo Federation the whole time because they are not going to go and give the blood or the urine to somebody who is not responsible.”

Despite today’s headlines, Kelmendi is planning on spending the rest of the time in Rio “enjoying” herself, before returning to Kosovo as the country’s first Olympic hero. 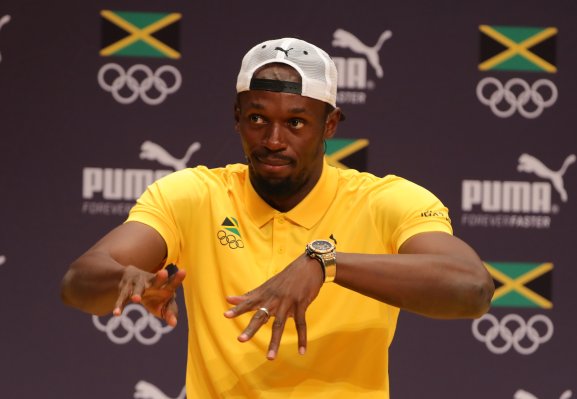 Rio Will Be Usain Bolt's Final Olympic Games 'For Sure'
Next Up: Editor's Pick