Rafaela Silva, a judoka who grew up fighting in one of Rio’s impoverished favelas – Cidade de Deus, “the City of God,” an area just five miles from the site of the Olympic judo competition – beat Sumiya Dorjsuren of Mongolia on Monday afternoon in the 57 kg gold medal match, clinching the host country’s first gold of the games. Judo’s a popular school sport in the country, and after Sarah Menezes, who won the 48 kg competition in London, failed to win a medal on Saturday, a slight panic settled in.

“Amazing, totally amazing,” said Tomaz Segundo, a doctor from the northeastern Brazilian city of Natal, a spectator at the match. “She’s a hero, coming from the poor area. What a relief.”

Silva developed her aggression trying to survive in her violent neighborhood, which has been “pacified” — or taken over by military police. Still, it’s a violent area. “My first coach and teacher always told me that I had a tendency toward aggressiveness,” Silva said. “He sort of noticed I had a skill. I was always climbing over walls, to get a kite that might have fallen down out of the sky.”

Silva’s arisen as a symbol of hope in the favelas. “I had a dream,” Silva said. “And those kids have their dreams too. If you can achieve your dreams through sports, do it. Hopefully I can be an example.”

At the London Games, Silva was disqualified for making an illegal move; she received racist abuse online, Silva said she was called “a monkey in a cage.” She almost quit the sport. “It was very difficult to overcome the problems of 2012,” said Silva. “But I insisted that judo was my life.”

She stuck with it, and Brazil has it’s first feel-good story of the games. (If only the men’s soccer team, which hasn’t scored a goal in group play, and is in danger of being eliminated, can follow suit). Brazil’s thirsting for medals at these Rio Olympics; Silva says even her family and friends have been pressuring her to deliver gold. She feels the country’s sports anxiety. “Of course we would have loved to win more medals [up to this point,” says Silva. He hopes her win “will just be a door, that will open the way for Brazil to win more medals.” 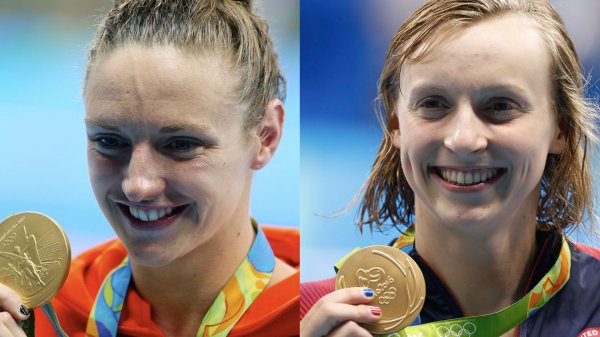 This Tweet Says Everything You Need to Know About Katie Ledecky’s Total Badassery
Next Up: Editor's Pick