He was supposed to be working on long-form multiplication problems—457 x 214, 378 x 29, 112 x 978—and my son kept asking me to check his answers. But it had been so long since I’d written out any math problems by hand that I wasn’t 100% confident I could quickly do the math in my head. So I’d pretend I needed to stir a pot, or turn off the stove, and I’d disappear into the kitchen to quickly check my work on a calculator.

He caught me, of course, and I was forced to explain that even though I couldn’t come up with the answer in my head, he still needed to learn how to do it.

Your math skill matters but it’s not the only thing: According to a newly released University of Pittsburgh study, mathematical skill does indeed seem to be genetic, even above just general cognitive intelligence. “The math skills of parents tend to ‘rub off’ on their children,” says lead researcher Melissa E. Libertus, an assistant professor in the Department of Psychology and a research scientist in the University’s Learning Research and Development Center. The study found that parents who have an intuitive sense of numbers pass this number sense on to their children. Additionally, standardized mathematics exam scores for school-aged children can be reliably predicted by looking at their parents’ scores on the same exam.

Things are not looking good for my son, math-wise, if he inherited his innate math ability from me.

Not to worry, says Libertus. Although parents do worry when they don’t remember how to solve math problems, “sitting down with your children and having them explain what they learned in school may be enough” to help them. In this case, the parent is acting as a “sounding board,” letting the child work through problems more or less independently. It’s always okay, Libertus reassures me, to say “I really don’t remember this,” and then sit down and figure it out together.

Yes, math is different today Back when I was in school, the focus was on rote memorization. Today’s kids learn differently. Laurie Bartels, a veteran elementary school teacher who has spent almost 20 years teaching classrooms of children how to multiply, notes that “old math was all about knowing the right answer. But if something changed in the equation, you couldn’t get to the answer. You didn’t know how it worked.”

Today, says Bartels, we know that children need to understand how the equations work rather than merely memorizing answers. That’s why teachers ask them to show even the smallest details of their work—by looking at the place where the answer went wrong, the teacher can figure out exactly what the child doesn’t understand.

Show them your way of doing it Don’t worry, says middle school principal and math teacher Mike Johnson. “It won’t hurt to show your kids the ‘old’ way you learned to solve problems.” But, he explains, teachers today are trying to move beyond teaching algorithms (the rules for solving a specific problem). They want their students to understand why an answer is right or wrong. This, says Johnson, represents a huge shift in learning from our generation to this one.

Never say “I’m no good at math” According to Johnson, “the biggest thing teachers have to do is to help their students overcome math phobia.” Parents often tell their children “I’m no good at math,” and the child gets the idea that math is something you either know how to do or don’t know. Instead of saying “I’m not good at math,” Johnson recommends explaining “I have to work at math.” Say “you can be good at math if you work at it.” Bartels concurs, noting that if you don’t have the answers, you can still ask your child questions. “Say ‘that’s an interesting question,’ and look up the answer together,” she suggests.

Make math fun Bartels recommends teaching math through play. With younger children, she says, play card games like War, in which parent and child each draw a card and decide: is mine bigger than yours? Or play dice games—roll 2 dice and add up the total, or figure out the difference.

Cooking is another tool for learning math. Bartels recommends that parents pretend to lose the full cup measure and then say “uh oh, how can we measure a cup now?” Ask your children to double a recipe, or cut it in half. You can even bring chemistry into the mix, Bartels says, asking “what would happen if we used 3 eggs instead of 2? Or 1 egg?”

Drop by the Internet The web is your not so secret weapon here. Khanacademy.org uses practice exercises and instructional videos to help students of all levels, from elementary through high school—and parents who want to brush up before sitting down to work with their children. It even has an official SAT prep course designed in conjunction with the CollegeBoard.

IXL.com is a subscription-based service that covers pre-K through precalculus. Users race against the clock and earn “medals” when they complete a level. This works best for competitive children—don’t try it if your child likes to take his time and think on a problem, or you’ll just add to the stress level at the homework table.

Coolmathgames.com uses games to help elementary-aged students learn to solve problems. For example, its electric joint game forces students to use logic to build a working electric circuit, and it lets them start over and try new possibilities if they make a mistake.

Teacher before tutor What about the more advanced math skills that older students are working to learn? Is it okay to bring in a tutor if you don’t understand the concepts? “Your first line of defense as a parent is always to go to the teacher,” says Johnson. Find out what resources the school has. Have your student talk directly to the teacher if he needs help. Johnson says that the tutor should be your last ditch effort, after all of the school’s resources have been exhausted.

Find the real life relevance “You can’t do this,” my son vented while trying to solve a particularly tough problem. “Why do I have to learn it?” Indeed. Why?

Says Bartels, “Kids know math. They use math. They just don’t call it math. We need to do a better job showing them the real life applications of math.” What about checking the air pressure in your tires, or your soccer ball? What about tracking player stats for your favorite players? You need math to do these things successfully, she points out. And what will you need to know later in life? “Teenagers have no idea what they want to be when they grow up, or what they’ll need to know to get there,” she says. Remind them that they’ll need math to figure out their taxes, or run their own businesses, or even make change at the coffee shop.

Math is everywhere in nature, says Bartels. In a snowflake. In a beehive. In the symmetry in people’s faces. We can observe math all around us; we just don’t take the time to think about it. Take the time to look at the world around you with your children, and you’ll see math hiding behind every corner.

Also: keep that calculator tucked away in the kitchen. Because 112 x 978 is really, really hard to figure out. 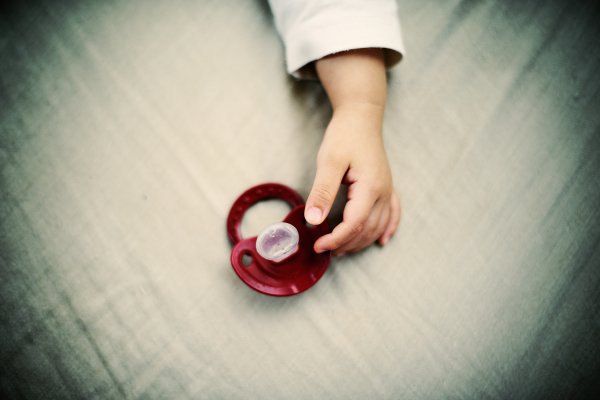 Why It's So Hard to Ignore a Baby's Cry, According to Science
Next Up: Editor's Pick