How Tim Kaine’s Harmonica Skills Make Him a Better Leader

Garrigue is a member of the Society for the Preservation and Advancement of the Harmonica and has played the harmonica for 40 years.

The harmonica is suddenly in the news because the Democratic candidate for Vice President, Senator Tim Kaine, is a devoted player. Kaine was introduced to the instrument at a young age by a friend. Nearly 50 years later, Kaine says he remains passionate about this humble instrument. But do his devotion to it, and the life skills he has learned through his association with it, lend themselves to skills he may need if elected Vice President of the United States? As a longtime harmonica player myself, I’d like to provide some answers.

His harmonica playing speaks to his outgoingness and ability to relate to people:

Kaine is not shy about joining in on the harmonica. He will play at country store “picking parties,” join in “jam sessions” and jump on stage at bluegrass festivals and other events. If a group will welcome him, he is glad to be with them—no matter their beliefs and politics. They’re united by music. This shows Kaine is expert at group dynamics, able to understand when he should play his role as a sideman, wait his turn and play only as long as he is expected to. He can read the non-verbal cues from the other musicians, and especially the leaders, as to when to jump in, and when to step back.

His sense of community and unification:

Kaine has a keen sense for what is appropriate, whether the musical event is one attended by dozens, hundreds or thousands. He understands the extent to which he is just a musician in these situations, no more special than anyone else on the stage or in the audience. His everyman persona—“just a harmonica player”—belies a sense of fitting in with the music community. And his boyish enthusiasm, low-key modesty, respect for his fellow musicians and clear love for live music all serve to unite people with him—because he fits into that community in a sincere, genuine manner.

His sense of history:

Kaine has studied his musical history. His favorites include acoustic blues musicians Sonny Terry & Brownie McGhee, bluegrass icons Doc Watson and Flatt & Scruggs, and Belgian jazz giant Toots Thielemans. He revered the experience of performing at the Carter Family Fold, considered by many to be the birthplace of country music. He respects those who came before, and greatly admires them, infusing his own playing with lessons he picked up from studying their works closely.

There’s not much to suggest Kaine has written much of his own music. But he has learned to improvise—thinking on the spot of what to play when the song leader nods to him, and how to develop a theme, with a build-up, high point and swift conclusion. For solos more purely rhythmic in nature, he echoes the themes of others and improvises off them, adding his own notes and accents, but staying on rhythm and “on message,” as it were.

His sense of calm:

Kaine has said that the reason he carries “an emergency supply” of four harmonicas in his briefcase at all times is so that when a moment allows, he can pull away from his daily duties for a brief respite. He immerses himself in the music when he plays, and that reverie can carry him back to days studying the records of Flatt & Scruggs, or the simple joys of playing on one of his close-knit family’s many camping trips. A little time with the “mouth harp” offers a relaxing escape, a slowing down from the rush of the day, and provides refreshment when his battery is running low.

His reactions and decision-making ability:

Playing within a group is a true collaborative effort, marked by teamwork, mutual respect, knowing one’s place and time, as well as sometimes just sensing that some precious silence and appreciative listening are the right choice for that moment. When called upon to play, often just with a nod of the head, Kaine, like other harmonica players, must be able to think on his feet, react quickly to the tempo and spirit of the performance of the song, and the most recent “speaker,” and make an almost instant decision of how to approach the blank space that has been presented to him by his fellow musicians. He can play slow or fast, few notes or many, follow others’ ideas, or go in a new direction—and then he must, at the proper time, return “the floor” to someone else, or back to another leader.

Given what he’s learned as a harmonica player, which began long before he got into politics, you might conclude those harmonica “life lessons” have served him well in the corridors of public service. He’s been an elected City Councilman, Mayor, Lieutenant Governor, Governor and Senator—and never lost an election. Not a bad payoff for a hobby that started out on the swings of an elementary school, trying to find the right notes to match the melody in his head. 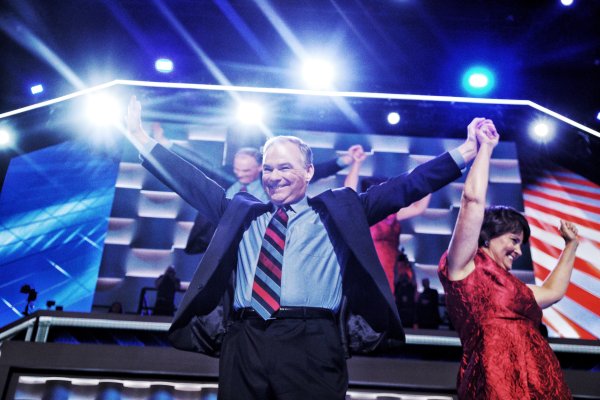