Were you hoping Donald Trump was watching?

“Who?” Ibtihaj Muhammad, the American fencer who had just lost to Cecilia Berder, of France, in the round of 16 at the women’s individual saber event in Rio, coyly replied with a smile. Her dream of winning an individual medal at her first Olympics had just ended, but Muhammad was unwilling to cede her moment.

The first American athlete to compete in the Olympics wearing a hijab, Muhammad has a platform far more prominent than that of most fencers, or even most Olympians. The other members of Team USA nearly voted her to carry the opening ceremonies flag — she trailed only Michael Phelps. And while Muhammad has already said plenty about the Republican presidential nominee, she chose to focus on the positive after losing in Rio.

The loss left Muhammad frustrated and flustered: she contested a few calls with the ref, and exited the fencing area in tears before returning to meet the media. “In a sport like fencing, you are your biggest opponent,” Muhammad says. “If you can control yourself and your nerves and emotions, and execute actions the way you want to execute them, you’ll always be successful. And I failed to do that today.”

What Muhammad hasn’t failed to do, however, is embrace role as an ambassador for Muslim-American women. “I want to break cultural barriers,” she says. “I feel like this moment, representing my country and the Muslim community, it’s bigger than myself.”

At the opening ceremonies, Muhammad took pictures with women from Saudi Arabia. “That was a beautiful experience to see women in hijab from all around the world be involved in sport and be present at this level of sport,” she says, calling that night in the stadium in Rio one of the best moments of her life. “Anyone who has paid attention to the news would know the importance of having a Muslim woman on Team USA,” says Muhammad. “It’s challenging those misconceptions that people have about who the Muslim woman is.”

She rattles them off: she’s forced to wear a hijab, she’s oppressed, she must not have a voice. “I’m very vocal, very verbal, and very comfortable expressing myself,” says Muhammad. “I’ve always been like that. I remember being told that I shouldn’t fence as a kid because I was black. And it’s like why? I want to fence.”

Indeed, Muhammad hopes her story resonates with girls across the world. “How often do we tell our girls there are things they shouldn’t do?” she said after her loss. “You know, they can be whatever they put their minds to.”

Muhammad still has a shot an Olympic medal, in the team competition on Aug. 13. “I know the Americans didn’t perform the way we wanted today,” says Muhammad. Fellow American Mariel Zagunis, who won the individual event at the 2004 and 2008 Games, was also eliminated in the round of 16. “But I love my teammates and I believe in them. I believe in myself. I believe in us. And I want us to win a medal. More than anything, I want us to do it for our country.” 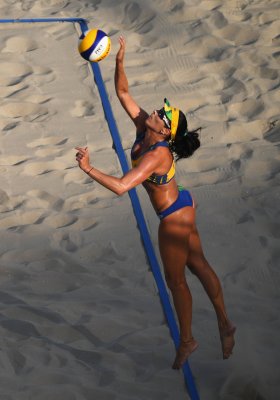 Brazilian Fans Have Some Olympians Crying Foul
Next Up: Editor's Pick