Saturday and Sunday were banner days for women in the Rio Olympics. Women took the stage in tennis, swimming and gymnastics with big moments for all.

Swimmer Katie Ledecky won gold in the 400 freestyle event, breaking the world record that she had previously set in 2012. She was ahead of her closest opponent by five seconds. Oh, and she’s 19 years old.

“I just let it all out,” she told the New York Times of the last stretch of the race. She’s one of two women who have completed that particular event in under four minutes.

Some have complained about those comparing Ledecky to Michael Phelps. One person had a genius way to flip that script:

Food for thought: What if we rethought of all female athletes (heck, all female anything) in those terms?

Hungarian swimmer Katinka Hosszu broke another speed record this weekend with her incredible win of the 400-meter individual medley event. However, her victory was somewhat overshadowed by the comments of NBC moderator Dan Hicks, who seemed to attribute her win to the efforts of her coach and husband, Shane Tusup. After Housszu’s win, Hicks said Tusup was “the man responsible” for her record-breaking swim.

Hicks defended his comments by saying that it is “impossible” to tell the story of Hosszu without mentioning her husband. He said that “with live TV, there are often times you look back and wished you had said things differently.”

However, some have criticized Tusup’s relationship with Hosszu in the pool. Her former coach, Dave Salo, told the New York Times, “I think you have to look at her motivation. Is it fear or confidence that is driving her?” The Times reports that while the couple acknowledge that their arrangement is unusual, they insist that it is not unhealthy. 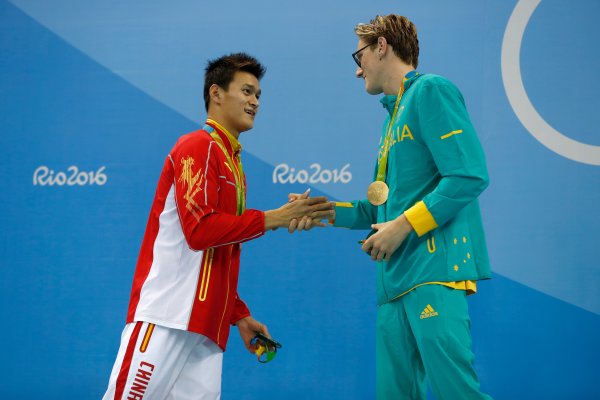 China Says Australia is on 'The Fringes of Civilization' Following Olympic Drug Dispute
Next Up: Editor's Pick