Beneath the crumbling stupas of Chiang Mai’s Wat Jed Yod temple, dozens of voters lined up on Sunday to take part in Thailand’s national constitutional referendum. But there was little excitement about a possible return to democracy in a country ruled by a military junta since a May 2014 coup d’état. Most of those shuffling forward were as silent as the ochre-robed monks who idled nearby, mindful that a no vote would simply prolong the junta’s stint in power, while voting yes would make the military a permanent political power broker in the Southeast Asian nation.

At the end of counting across the country, around 60% of Thais who voted nationwide had approved a document that allows for an unelected Prime Minister and a 250-member upper house entirely appointed by the military. The 500-strong lower house would be chosen by a new electoral system likely to produce a weak coalition government, thus giving the military final say on key policy decisions. “It is a show of force by the people to determine the country’s future,” junta chief General Prayuth Chan-Ocha said of the referendum’s passing. Nevertheless, turnout was low at just 58%.

The constitution has been touted as a solution to the cycle of often bloody street protests and military interventions that have plagued Thailand for a decade. But it was also clearly designed to permanently quash the electoral dominance of divisive former Prime Minister Thaksin Shinawatra. Parties backed by the telecoms mogul have swept every election since 2001 — most recently led by his sister Yingluck — but they have been ousted twice by the military and thrice by the courts. He remains equally adored by voters in the poor, agrarian north and northeast and reviled by the Bangkok elites, who accuse him of being a dangerous and corrupt demagogue. Thaksin was convicted of abuse of power in 2008 and remains in self-imposed exile in Dubai. The most recent coup was preceded by mass protests against an amnesty bill that would have allowed him home and reunited with some $1.2 billion in cash and assets. After six months of demonstrations, and with no end to the turmoil in sight, the military seized control — Thailand’s 12th putsch since the end of absolute monarchy in 1932.

The coup has had grim consequences for Thailand’s 68 million people. The economy is anemic, vital tourist numbers are down, and the junta routinely detains critics and tries them in military courts. Thailand was once a shining beacon of democracy in a region blighted by brutal authoritarianism. No longer.

This democratic backsliding is problematic for U.S. foreign policy and the Obama Administration’s “rebalancing” to Asia. Thailand is America’s oldest ally in a region increasingly dominated by China, but the coup triggered automatic U.S. sanctions and the suspension of several million dollars in U.S. aid. Secretary of State John Kerry warned military abuses “will have negative implications for the U.S.-Thai relationship.” In response, the Thai junta has been growing closer to Beijing and Moscow. “The junta leaders want to use Russia and China as a bargaining chip to pressure Europe and the U.S. to re-engage,” says Prajak Kongkirati, assistant professor of political science at Bangkok’s Thammasat University.

The passing of the constitution has paved the way for elections next year and a return to democracy — albeit a “guided” one. Though former Prime Minister Abhisit Vejjajiva, leader of the opposition Democrat Party, doesn’t think the document will resolve the simmering rivalries between the pro- and anti-Shinawatra camps. (Both major parties urged voters to reject the constitution.) “Clearly there is a democratic deficit,” he told TIME before the vote. “It’s taking the country back to where the bureaucracy becomes dominant again. That’s not what the country needs.”

Many believe the military intervention was spurred, in part, by Thailand’s deep unease as revered 88-year-old King Bhumibol Adulyadej nears the end of his reign. Crown Prince Maha Vajiralongkorn, the King’s son and heir, is unpopular following a slew of scandals, and the nation’s elites have pressed the military to protect their interests as the palace’s influence wanes. “The military and the royal alliance needs to weaken other political forms to ensure nothing is going to disrupt the dominance of the traditional elite during the succession process,” says Prajak.

Questions will remain over whether Sunday’s referendum was truly free and fair, especially as the junta banned any discussion of the draft, locking up dozens of critics and refusing to permit independent monitoring of the polls. But many voters, even in Thaksin’s northern heartland, were clearly swayed by promises that the draft would end alternating political paralysis and often deadly street politics. “Hopefully everyone can work together,” says dental student Natnicha Ketchaikosol, 20, at Wat Jed Yod. “The politicians can improve the economy and the military and keep stability.”

Of course, stability relies on the pro-Thaksin Red Shirt protest movement calmly accepting what may well prove the end of majoritarian rule. Prasit Uphatuug, a Red Shirt leader in the northern district of Doi Saket, says that momentum is building for a return to the streets. “If 100,000 or a million people protest, then the soldiers won’t be able to suppress us,” he says. Any mass demonstrations would likely wait until after elections next year, when junta-imposed restrictions on gatherings of five or more people would be relaxed. “I think 2017 may be the year of living dangerously again in Thailand,” says Paul Chambers, a political scientist based in Chiang Mai.

For others who campaigned against the draft, the constitution was a missed opportunity to permanently solve these festering internecine conflicts, even if all sides have vowed to respect the result in the meantime. “It’s the same all over again,” says student activist Rackhart Wong-Arthichart, 25. “Thailand has never gone through the mature democracy stage. We are stuck in a vicious cycle of coup, protests and coup again. We have to fix the root causes.” 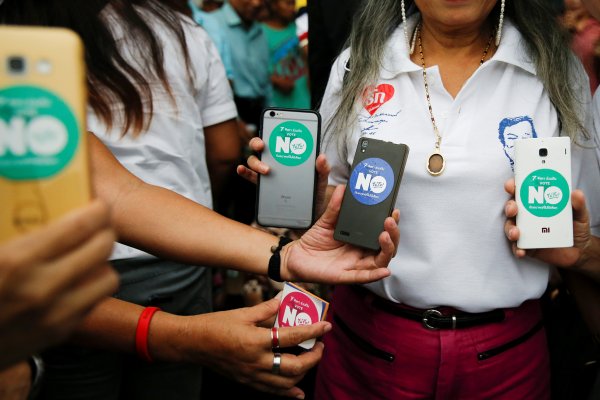 Thailand's Referendum Is Only the Start of a Struggle
Next Up: Editor's Pick