Why China Turned Into an Olympic Basketball Afterthought

Paul George and Ailun Guo in action during the China vs USA basketball game at the 2016 Rio Olympic Games on Aug. 6, 2016.
Hahn Lionel—Sipa USA/AP
By Alexander Wolff / Sports Illustrated

At 7′ 6″, former Chinese basketball icon Yao Ming is large enough to obscure many things. And to judge by Saturday’s 57-point, over-the-speed-limit Team USA victory against Yao’s old team, it’s clear that one of those things was the strikingly small pool of elite basketball talent in a country of 1.36 billion people.

From respectable quarterfinal finishes at the 2004 and ’08 Olympics with Yao in the middle, the Chinese have spent much of the last quadrennial scraping the basketball bottom. Only now, with Yao retired, there’s no hiding how low they’ve sunk. Here’s one measure: Other than Venezuela, China is the only country in this Olympic draw without a player currently on an NBA roster. Moreover, only one of its players has any experience in the league, and that’s the team’s eldest, 28-year-old Yi Jianlian, who spent much of his five NBA seasons on various disabled lists. Yi is a proud and valiant Olympian who has served China as a torch bearer and a flag bearer, but he’s not much of a load bearer.

Indeed, one of China’s bugbears over the years has been injury: Poor performance would cause coaches to order more practices, which led to overtraining, which caused even more injuries. It didn’t help that in 2008 the national team lost 6′ 8″ Xu Yong, a promising product of Yao’s own youth program in Shanghai, after bone cancer forced him to retire at 19.

China went winless at the 2012 London Olympics under an American coach, Bob Donewald, Jr. Then, the Chinese Basketball Federation hired Panagiotis Giannakis, the former player with and coach of Greece, to replace him. On the court and on the sideline Giannakis liked to grind things out, posting bigs up and pounding the ball inside, a style out of step with a modern China in the thrall of the NBA. An aloof manner and inability to speak Chinese kept him from cultivating relationships with the players and his bosses at the federation. Losses at the 2013 Asian Championships to Iran, Korea and, most humiliatingly, Chinese Taipei, left China out of the medals and sealed his fate.

Enter Gong Luming, who played for China at the 1988 Olympics and in the mid-’90s guided a team featuring big men Wang Zhizhi and Menk Bateer to the top eight in the world. Gong culled the roster of older players, and at the 2015 Asian Championships led his new wave to a sweep of the field and qualification for Rio. Now his ongoing task is to remake the team’s approach with an eye to the future. “Traditionally we played very fast, run-and-gun,” says Shen Yu, a sideline reporter for CCTV. “But since Yao left, we fell away from that. We’re returning to that style. Even if we don’t win a single game in Rio, we have faith in a bright future because we’re doing this the right way.”

As one-sided as Saturday’s 119–62 loss was, it showcased glimmers of that future. The Houston Rockets used the 43rd pick of last June’s draft to choose 7′ 2″ Zhou Qi, who’s only 20. “He’s got a good touch and got good looks at the basket,” said U.S. forward Harrison Barnes of Zhou, who beat DeMarcus Cousins of the U.S. for the opening tip and soon afterward blocked a shot of his in the low post.

Seven-footer Wang Zhelin, selected 57th by the Memphis Grizzlies, is 22. He had a less auspicious game, committing back-to-back turnovers after checking in midway through the first quarter. “It wasn’t just their individual defense, but their team defense that presented problems for me,” Wang said. “They stopped me from doing what I wanted to do. But it was a good opportunity to learn.”

As China’s young big men get NBA certification, two of its fledgling guards may be more impressive, simply because the country has never been known to produce top-flight players at that position. 6′ 1″ Zhao Jiwei is only 20, but he moves with moxie and connected on a couple of no-look passes. He tied for his team’s high with six rebounds. And in the second half he pulled a hesitation dribble so persuasive that his defender, Paul George of the U.S., ended up skidding on his butt to the delight of the crowd. Zhao did all this despite a bum right shoulder that had kept him out of action as recently as last month.

Pair Zhao with 6′ 4″ Guo Ailun, who’s 21, and China has a backcourt that could take it through three more Olympic cycles. “They’re clever and quick with the ball and can break you down,” says U.S. assistant coach Tom Thibodeau, who as an assistant with the Rockets coached Yao for three seasons. “[Zhao] is a tough guy to keep in front of you. He’s got courage and toughness and presented some problems for us.”

All told, China’s team features only three previous Olympians, and its average age is 23. So Gong’s first realistic medal target will likely be the 2019 FIBA World Cup, which eight cities around China will host. No one back home will hang crepe over losses in Rio, so long as players are developing. As Wang says, “Our coach took us through a difficult time and then to an Asian Championship. We should have patience, build a foundation and try to get better.”

What the Chinese do care about are their favorite NBA stars, and only one team had them on Saturday. And they would care more about this U.S. team if Stephen Curry and LeBron James had shown up. With his modest physical stature, clever ballhandling and accuracy from deep, Curry ripped the mantle of MPPC (Most Popular Player in China) from Kobe Bryant’s hands last season, even before the Black Mamba had left the stage. As for James, his Jordanesque performance in the NBA Finals won over many Chinese, especially people old enough to remember Qiao Dan, leader of the Chicago team that China during the ’90s knew as “the Red Oxen.”

“It’s a pity that Steph and LeBron aren’t here,” says Shen, the CCTV reporter. “It won’t affect the result for the U.S. team. But it will affect the ratings and interest.”

China counts more NBA fans than the U.S. does, so it goes without saying that their absence has adversely affected CCTV’s ratings too. But we’ll say it anyway, until China returns to its place as a world basketball power. 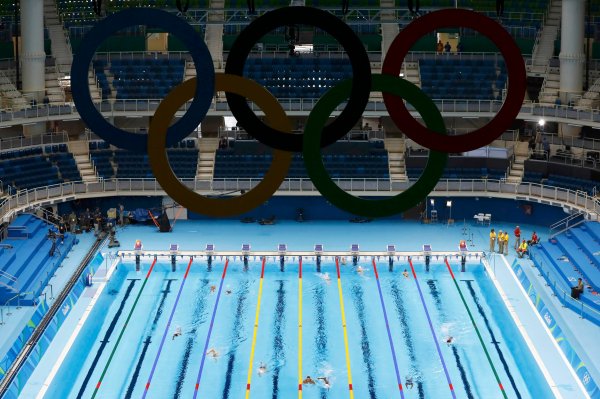 These Are the Must-Watch Swimming Races at the Rio Olympics
Next Up: Editor's Pick