The story of the week—that GOP leaders had staged an “intervention” with Donald Trump—spread like wildfire, however ridiculous it sounded.

“Does anybody really think that the way you handle a billionaire nominee who has already won the nomination is to have six people show up in his living room unannounced like a drug intervention?” a veteran GOP strategist asked me.

Yes, the premise was crazy—but so is the year.

Donald Trump seems to be self-immolating for the nth time, and onlookers have spun ourselves into a round-the-clock quandary, questioning what could be motivating him, why he doesn’t just stop.

Trump can’t stop, won’t stop. Not now, not after the election. In later years, he will likely still be tweeting away. And that’s because he’s an “injustice collector.” This week, Trump’s overarching campaign strategy gelled into a singular focus: avenge an absurd collection of perceived slights and outsize victimhood.

Famed former FBI profiler Mary Ellen O’Toole, who wrote Dangerous Instincts, divides injustice collectors into two categories: non-aggressive and dangerous. Dave Cullen, the author of Columbine (and a good friend), writes, “Collectors magnify petty ‘injustices’ and perceive them as intentional and purposeful,” Cullen writes. “Over time, he forms a worldview of himself as victimized, bullied, discriminated and disrespected.”

Trump’s obsession with his own victimhood is particularly remarkable coming from the heir to a real estate fortune, and his paranoia and obsession with petty revenge over winning the White House are the source of unfounded speculation that Trump is searching for an exit ramp.

Trump has a lifelong pattern of relishing petty revenge on his enemies, tweeting out in 2012: “It makes me feel so good to hit ‘sleazebags’ back — much better than seeing a psychiatrist (which I never have!)” Trump even harped on revenge the day after his convention, returning to his favorite conspiracy theory that vanquished rival Ted Cruz’s father was somehow implicated in the assassination of an American president.

This week, revenge factored large into Trump’s outline of his future. He told the Washington Post’s Phillip Rucker that his post-election plans included funding PACs to harm Republican and Democrats who had opposed him. Months later, recalling the exact language Paul Ryan used to undermine his own endorsement, Trump found his moment. When Ryan rebuked him this weekend for his callousness towards the Gold Star Khan family, Trump casually thrust in the knife by declining to endorse Ryan and tacked on embattled incumbents Kelly Ayotte and John McCain. He seemed proud that his supporters threatened Cruz’s wife Heidi at his convention, bragging that security had to whisk her out: “They had to bring his wife out. She was in danger,” Trump told Rucker.

Trump’s bizarre and dangerous rantings about war and peace have propelled this election into a mishmash of the amateur phraseology surrounding mental illness. MSNBC’s Joe Scarborough cited an unnamed foreign policy expert who briefed Trump as incredulous that Trump repeatedly asked why he couldn’t use the nuclear weapons in our arsenal. Democratic Congresswoman Karen Bass, a physician’s assistant before she entered politics, started a #DiagnoseTrump petition to encourage the candidate to receive a medical evaluation for what she observes could be narcissistic personality disorder.

Republicans should stop expecting Trump to change. Injustice collectors are untreatable because they never see themselves as the problem. “To argue or debate with an injustice collector entrenched in his belief system will not likely persuade him that his perceptions and conclusions are incorrect,” O’Toole writes in her study on these odd collectors. “Instead, he will probably add you to his list.” Trump is also likely surrounded by top advisors with no vested interest in telling him to drop out of the race—they want to enjoy the spoils of the $80 million he just raised, so he can choose the message he wants to hear. The specter of loser-dom is the only leverage party elders really hold when it comes to motivating Trump—and if that happens, of course, it will be someone else’s fault.

The last time a major ticket was so imperiled after its candidates were locked in was in 1972. Democratic nominee George McGovern dropped Senator Thomas Eagleton 18 days after his convention ratified him.

Eagleton, a first-term antiwar Senator from Missouri, had failed to disclose to McGovern’s vetters his struggle with depression, for which he had been hospitalized three times and treated with electric shock therapy.

McGovern went on to lose every state except Massachusetts and the District of Columbia, a 49-state shellacking that is still the worst defeat in modern presidential politics. Eagleton won re-election to his Senate seat two years later. In later years, McGovern was remorseful over forcing his running mate out. “If had it to do over again, I’d have kept him,” McGovern said. “I didn’t know anything about mental illness. Nobody did.”

In 2016, there’s much less stigma surrounding mental illness. For the good of the country, we are all just hoping Donald Trump will just get the help he needs. 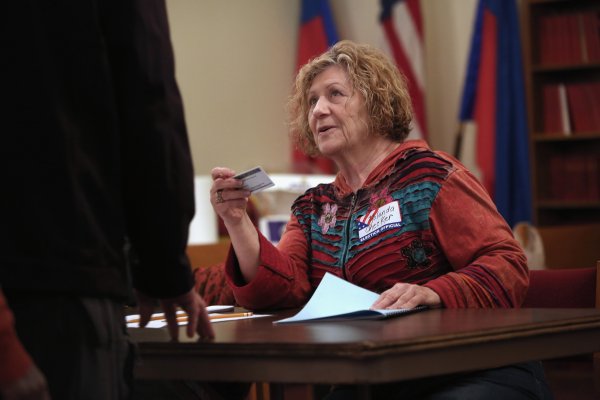 Voting Rights Are Stuck in the 60's
Next Up: Editor's Pick