I’m a Female Wrestler and a Victim of Domestic Abuse

As a female professional wrestler, I understand the pressure female athletes feel to serve as role models to other women by being strong and letting them know that they can shatter any glass ceiling. (Note to women reading this: Yes, you can!)

But being a “victim” doesn’t seem to fit into the narrative of being a strong woman. When people see me, they see a muscular woman who wrestles both men and women. They think that I can surely take care of myself—and kick ass—if a man ever tried to raise a hand to me.

The reality is that I was a victim of domestic violence, and for so long I felt pressured to be silent around my own abuse, allowing it to continue behind closed doors.

Not only was I embarrassed by what was happening, I stayed silent because I didn’t want to be known as a victim. In order to be a top female wrestler, I needed to be perceived as a strong woman, not a victim. Besides, I was working with World Wrestling Entertainment’s (WWE) NXT program, and my ex and I were both working with TNA Impact Wrestling at the time, so I felt I had to protect both of our careers.

That’s why silence seemed like the best option. But I know now that silence allows the issue of domestic violence to thrive although the statistics are loud and clear: 1 in 4 women will experience domestic violence in her lifetime.

I never had a black eye, but whenever my ex didn’t like something I said or did, he would choke me. Eventually, I realized that his mindset was “because I’m not leaving a mark on you, it’s OK.”

I was recounting this experience with Brian Pacheco of Safe Horizon, an organization that helps victims and is trying to change the way we talk about domestic violence, who informed me how much danger I was really in. He told me that strangulation can be a significant predictor for future, often lethal violence. I was stunned to learn this.

Looking back, had I stayed, I wonder if I would still be here today.

I’ll never forget the red flags: The time he kicked my injured knee. The times he kicked or punched our dog. Or the time he scooped me up and put me in a closet. I laughed because there was no lock—I could simply get out. But he put the chair between the closet and door so I couldn’t open it. The situation freaked me out, and I couldn’t call for help because he took my phone. I broke down that door and finally fought back. But he took me down with ease and wrapped a towel around my neck.

Many people don’t expect victims to fight back. But many of us do. Do we not deserve to protect ourselves? I was so in love with him though that I wouldn’t give it my all, only fight back enough to get him off.

I knew I had to leave the relationship. And when I finally told people, more often than not, I wasn’t believed. Some of our mutual friends thought I was exaggerating and making it up. In fact, when I filed the order of protection, my ex’s trainer tried to talk me out of it. He told me that I was hurting my ex’s career because I have a bigger name and so I should be more considerate.

But it was when I told other female athletes, other female wrestlers, that my heart sank. When I disclosed my abuse to them, many disclosed the same to me.

Today, I shatter that silence. Because being a strong woman means being allowed to be vulnerable and ask for help when we need it. And we should be believed, not blamed.

You may have noticed my purple nail in some of my recent matches. I started painting my nail last year when I first saw Safe Horizon’s #PutTheNailinIt campaign to end domestic violence—it my secret way to say, “I survived.” Now, I paint my nail to let other survivors know I believe you. It’s OK to speak out. It’s OK to seek help.

Join me and take the #PutTheNailinIt vow to end domestic violence. No one should have to suffer in silence. 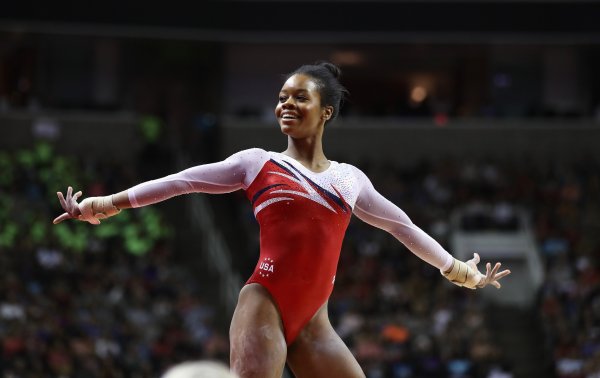 What Gabby Douglas and Simone Biles Mean Beyond the Olympics
Next Up: Editor's Pick