How Social Media Will Define the Olympics' Success

There is still some time to go until the 2016 Rio Olympics begin. But the games have already been playing out in the news for a while – and for all the wrong reasons. Brazil has been criticized for political instability, doping scandals, environmental and safety concerns and the Zika virus.

Although research has shown that the media tend to be negatively biased toward non-Western mega-event hosts, Rio has been left to contend with what is perhaps the most problematic mainstream media coverage of any Olympics so far. In turn, we’d expect the organizers and the International Olympic Committee to be battling to reclaim the Olympic Games’ image. But in an unprecedented move, they’ve done almost the opposite.

In their strategic communications plan, drafted as early as 2012, Rio’s Olympic organizers relinquished a surprising amount of storytelling power not only to journalists but to the general public on social media, writing “citizens who publish content on the web are the ones who will ultimately define the success of the Games.”

While social media are a pervasive global force, it’s unclear how they’ll be used at the Rio Games. Which narratives will be told, by whom, and what impact will they have?

Indeed, if we think about sporting events as spaces for media consumption and evolution, then the battles for Olympic “success” take place as much through various storytelling platforms as they do in the stadium. But what does success for such an event look like?

According to one official IOC definition, success is measured by media audience engagement. The more of it, the better. From that perspective, the IOC has done rather well in recent years, garnering substantial audiences on its official Olympic social media accounts.

London’s 2012 Summer Olympic Games had an official social media following of 4.7 million users across all platforms. Two years later, Sochi’s had gone up to over 5 million across two platforms alone: Facebook and VKontakte, the most popular Russian social media site. But beyond these official channels, what’s social media’s potential impact on the hames?

We certainly need to be skeptical about statements that exaggerate the role of social media. We know that social media alone does not cause revolutions. And while social media numbers have increased for the Olympic Games, they pale in comparison to its 3.6 billion, and growing, in global television audience. But there are some examples of social media facilitating alternate types of storytelling.

In terms of the Olympics, my own research suggests social media served as an important, albeit marginal, channel in reframing NBC’s mainstream coverage of the 2014 Games in Sochi.

Through a mix of automated textual analyses and in-depth readings of hundreds of Tweets, I found that a new story emerges. An international group of Twitter users gathered around the #NBCFail hashtag to point out the network’s gaffes, to figure out how to watch the coverage live and for free and to piece together what was not shown. These Twitter users created their own highly politicized version of the Olympics, which often went against NBC’s highly paid broadcast rights to set the official storyline in the U.S.

Twitter users publicized a series of important omissions from NBC’s coverage of the Olympic Games. These included the removal of a Soviet era act from the opening ceremony, a missing performance by t.A.T.u (a supposedly gay Russian band), the disappearance of the Russian police choir singing “Get Lucky” and the editing of IOC President Thomas Bach’s speech, in which he referred to the IOC being committed to human rights. And that’s all just in the opening ceremony.

To be sure, there were also plenty of tweets dedicated to discussing the cause of Bob Costas’ pinkeye. Humor was certainly the social lubricant and common language behind much of the content. One tweeter posted a cartoon and in Russian playfully compared the cutting of a peacock’s wings to NBC’s editing of the Sochi 2014 opening ceremony.

Still, what #NBCFail revealed was more or less a counter-narrative to mainstream media, with its focus on medal counts and heartwarming athlete backstories.

While these are not the first instances of a hashtag being used to expose what was not shown, they do speak to the role of the citizen social media user as alternate storyteller or active spectator.

So what can we expect for Rio?

Research on #SochiProblems, which became more popular than the official Sochi handle, shows that the vast majority of those tweeting about the problems at the Winter Olympic Games were not actually on the ground in Sochi – or even in Russia at the time. And since the majority of the world participates in the Olympics remotely via media, we can expect this summer’s social media narratives will come from far beyond Brazil. Furthermore, despite being a country that’s very active on social media, it’s worth noting that the typical social media user is not the typical Brazilian. With just over half of the population having access to the internet, social media in Brazil remains a medium of privilege.

Similar to Sochi, we can also expect the real social media action in Rio to take place away from official media accounts and hashtags, which have grown in presence.

According to Graeme Menzies, communication director for the Vancouver Olympics, the 2010 Olympic Games were the first and last social media Olympics. In his view, social media at the 2010 games was “the people’s media,” with little to no organizational involvement. Not long after, the IOC moved to exert more power over this space, partnering with the likes of Facebook, Twitter and YouTube to create official Olympic social media content. Furthermore, social media platforms like Twitter saw the games as an opportunity to attract new users. For instance, Rio 2016 will see extensive coordination with Twitter – and the largest launch of emojis to date.

The IOC also developed explicit sets of guidelines for how athletes and Olympic personnel should use social media. Notably, this comes partly in an effort to attract younger audiences – but it also comes at the expense of a loss of some social authenticity.

In addition, the IOC relaxed its sponsorship rules for the Rio Olympic Games, meaning that the social media space will only become more cluttered with commercial content. Preliminary findings from my upcoming study about the Rio games show that one of the most popular Olympics-related topics on Twitter leading up to the event has been the promotion of Airbnb rentals. While locals are posting to advertise their own apartments, the company does have an official partnership with the IOC.

Still, if we think of the Olympics purely as media content, then part of its communicative power lies in the ability to engage people and spotlight a range of issues beyond sport, whether short-term apartment rentals or failures of major media networks.

We can almost be sure that social media will succeed in attracting bigger audiences this year. Whether it can have a meaningful impact in shaping the Olympic narratives beyond echoing the mainstream media or corporate partnerships remains to be seen. After all, general news coverage of the lead-up to the games has itself been fairly harsh and hardly evocative of the party atmosphere the organizers would like us to feel.

Although increasingly cluttered, the power of the citizens’ social media space in relation to the Olympic Games and media corporations lies precisely in its ability to show something unexpected. As long as there is still a possibility for that to take place, and as long as we are willing to do some more digging for it, we should expect some interesting material from Rio – and probably some entertaining memes, too.

Katerina Girginova is a Doctoral Student in Communication at University of Pennsylvania. 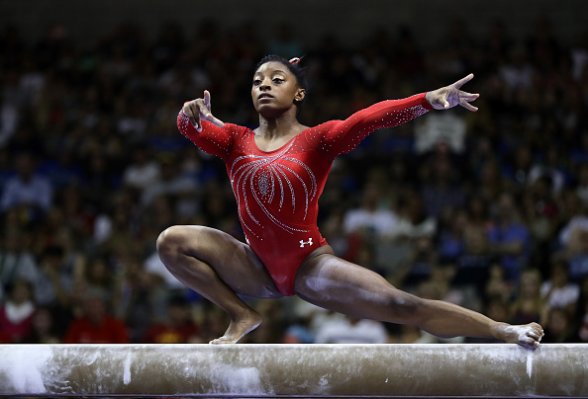 Here's How Much the U.S. Olympic Gymnastics Team's Leotards Would Cost
Next Up: Editor's Pick