Jared Leto hit Wednesday night’s London premiere of Suicide Squad in a double-breasted bottle green coat, and because it’s bright and green, it has lit up the Internet.

People on social media have already compared the Gucci outfit, a jacket the color of a Shamrock Shake and powder pink trousers, to Maybelline’s Great Lash mascara (because of the pink pants), Willy Wonka (because Jared Leto might be a modern day Willy), your basic watermelon, a cooler watermelon filled with guacamole and the gatekeeper at the Emerald City in The Wizard of Oz.

But people are even more excited by the look of ecstasy in the Suicide Squad star’s eyes when he first saw the coat at a Gucci runway show, in a thrilling photo from the show that BuzzFeed unearthed. Everyone else seems just as invigorated as Leto about the bright green affair, and people are even jealous of the jacket’s ability to inspire such unbridled joy.

UPDATE: Later on Thursday, Jared Leto told Vanity Fair that at the moment the photo of him at the Gucci show was taken, he was reacting to seeing a friend, not the jacket. 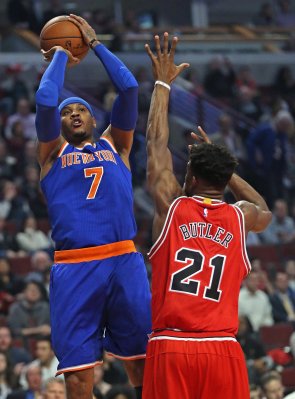 Vanessa Carlton Understands Why Carmelo Anthony Refused to Join This 'A Thousand Miles' Sing-Along
Next Up: Editor's Pick