What to Do When Your Kids Won't Listen to Reason

Cultura RM Exclusive/Frank and Helen—Getty Images/Cultura Exclusive
Ideas
By Erica Reischer
Erica Reischer, Ph.D., is the author of WHAT GREAT PARENTS DO: 75 Simple Strategies for Raising Kids Who Thrive. A clinical psychologist and parent educator based in Oakland, CA, she holds a doctorate from the University of Chicago in psychology and human development, and is an honors graduate of Princeton University. A former consultant with McKinsey & Company, Dr. Reischer sits on the advisory board for HappyHealthKids.com and leads popular parenting classes and workshops at UCSF Benioff Children’s Hospital, Habitot Children’s Museum, and the University of California. Her writing about children and families appears in Psychology Today, The New York Times, The Washington Post, and The Atlantic. Learn more at http://www.drericar.com/.

Here’s a scene I witnessed a few years ago. A father came to pick up his daughter after a day of camp. She was happily playing with her friends when he arrived. When he told her it was time to go, she replied: “I don’t want to go yet. I’m having fun.” Her dad responded: “But you’ve been here all day. You’ve had enough.” She got upset and protested again that she wasn’t ready to go. This exchange went back and forth until eventually the father sternly took his daughter’s arm and walked her to the car.

It seemed like the kid wouldn’t listen to reason. They had to go and she was digging in.

But what the dad didn’t realize was that reasoning often doesn’t work with kids unless you respect their reality.

Respecting our children’s reality means letting them feel, think, and experience things in a different way than we do. It sounds easy—until you discover that it’s different from your own. That’s when many parents turn to threats, force, and ordering kids around.

One of the best ways to build a bridge between your reality and the child’s is through empathy.

When we practice empathy with our kids, we show respect for their feelings and their unique experience of the world. Practicing empathy shows that we are really listening, and that we understand (or at least are trying to understand) their point of view. Empathy positively harnesses the power of emotions, which can easily overtake reasoning. This is why empathy often works when reasoning fails. (Strictly speaking, the term empathy means actually feeling what someone else is feeling, in contrast to sympathy, which means understanding someone else’s feelings. I am using the term empathy here more loosely, to mean focusing on feelings, either through compassion, sympathy, or empathy.)

Not respecting our children’s reality is something we are generally unaware of doing. We really have to pay attention to notice the ways in which we unintentionally disregard or question their feelings and perspective.

A more skillful way for the dad to handle that situation would have been to practice empathy right from the start. When the daughter said she didn’t want to go, the father might have responded: “Sweetie, I can see you’re having a lot of fun and you really don’t want to go yet (empathy). I’m sorry about that. At the same time, we are meeting Mom for dinner and it wouldn’t be nice manners to be late (reason). Please say good-bye to your friends and go get your things (request).”

Here’s a second example of how we unintentionally fail to respect our children’s reality and how doing so can create conflict when our goal is just the opposite: a first-grader doing his math homework is struggling. He gets frustrated and says, “I can’t do this.” Many well-meaning parents respond with something like this: “Yes, you can, sweetie. Here, let me show you.”

By telling him that he really can do the problem he is struggling with, you are intending to motivate him to keep trying. Although your intentions are good, you are essentially telling him he is wrong about his experience; you are arguing with his reality.

Paradoxically, this type of response makes some kids even more likely to hold on to their belief that they cannot do it: “No, I can’t!” Now the situation has unfortunately escalated from frustration with homework to frustration/anger/sadness at not being understood.

A more skillful way to respond in this instance would be, again, to start with empathy. “Honey, I can see you’re struggling with this and it feels really hard right now. How about a hug? O.K., show me where you’re feeling stuck with this; let’s see if we can come up with some other ways of approaching this problem. I can see this math is tricky for you right now. At the same time, I believe that you can figure it out.”

In this example, note the important, but subtle, distinction in saying, “I believe you can do it” instead of “You can do it.” In the first, you are stating your opinion; in the second, you are stating something as a fact that argues with your child’s experience.

Skillful parenting involves watching for opportunities to reflect and show empathy for the different ways in which your child experiences the world.

If you want to voice your disagreement, try doing so in a way that also acknowledges the validity of their way of seeing things, instead of stating it as a fact. Compare these two hypothetical responses to a child’s statement, “This park is no fun. I don’t like it.”

The second response allows for a difference of opinion, while the first one suggests there is only one right answer (yours).

Similarly, if your child is upset about something, respecting her reality would mean that instead of saying “Don’t cry” or “Everything’s fine” (both of which don’t acknowledge her experience at the moment) you might say, “You’re feeling upset right now.”

Let your kids have their feelings and perspective, even if you don’t understand or agree with them. And then try reason.

Adapted from What Great Parents Do: 75 Simple Strategies for Raising Kids Who Thrive by Erica Reischer, Ph.D, published by TarcherPerigee, an imprint of Penguin Random House. 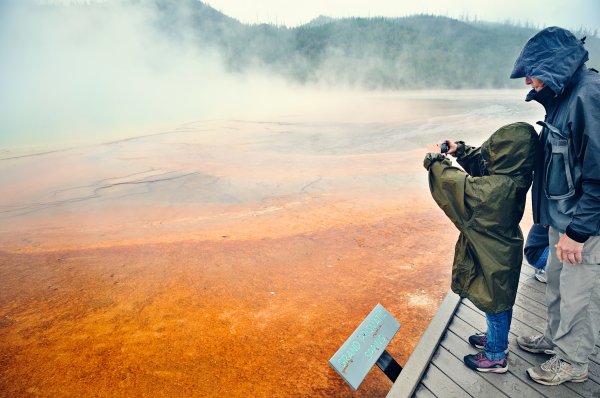 How to Get into a National Park for Free
Next Up: Editor's Pick