My Muslim Faith Makes Me an American Patriot

Khizr Khan speaks during the final day of the 2016 Democratic National Convention on July 28, 2016, in Philadelphia, PA.
Robyn Beck—AFP/Getty Images
Ideas
By Debbie Almontaser
Debbie Almontaser is the founding principal of the Khalil Gibran International Academy in Brooklyn and is the Board President of the Muslim Community Network

Anti-Muslim bigotry has become a national epidemic. Elected officials and candidates alike have laid the blame of terrorism at the feet of innocent American Muslim citizens. Governors, senators and presidential candidates have proposed everything from a national registry tracking American Muslims to a ban for American Muslims and Muslims traveling abroad to religious tests to determine citizens’ faiths. They have questioned the loyalty of citizens based on their faith or how they choose to pray.

In the past week, this Islamophobia has expanded to include a community of Muslim Americans that is normally universally respected: fallen soldiers and the Gold Star families they leave behind. After Khizr Khan’s impassioned Democratic National Convention speech last week about the loss of his son and the American values that compelled his child to die for his country, Republican candidate Donald Trump questioned whether Khan’s wife was “allowed” to speak, insinuating that she remained silent because of her faith. Since then, Trump’s adviser suggested that Khan is a secret member of the Muslim Brotherhood—a non-American in disguise. These statements suggest that Captain Khan’s Gold Star family is somehow less American than anyone else, simply due to their faith.

My son was deployed as a national guardsman to Ground Zero after Sept. 11, compelled to respond to the attack against our nation and to defend our core values. He was following a great family tradition: I belong to a family of seven active duty military and veterans, including one who has received a Purple Heart. Many of them have also faced bigotry at home after tours abroad.

Too many American Muslims are scared to wear a headscarf, pray at their house of worship or even walk with their children down the street for fear they may be attacked. This goes against the very core of our nation’s values. No one should feel threatened—by their neighbors or by their representatives—because of how they pray.

The suggestion that a citizen can be either American or Muslim, but not both, is narrow-minded and factually incorrect. A recent poll conducted by the Institute for Social Policy and Understanding found that the more devoted an American Muslim reported being to their faith, the more likely they were to describe themselves as patriotic Americans. There is no conflict between faith and patriotism. The two go hand in hand.

I love my country because it encourages and embraces the freedom of all people to practice their faiths without discrimination or threat of violence. I love my country because, in the days after Sept. 11, when Muslim New Yorkers feared backlash and assault, my neighbors organized patrols so that no Muslim mother would feel unsafe walking her child to school while wearing a headscarf. That is the America I remember.

There are nearly 6,000 active duty Muslims in the military. They deserve our praise and respect, not interrogations over whether they are truly patriotic Americans.

This is a contentious election cycle, but that is no excuse for hate speech. It is not acceptable for politicians to divide people against each other on the basis on how they pray to further their own political advancement. It is up to all Americans to call out bigotry, particularly against those families who have lost everything for our nation’s freedom.

Today, we have a choice: we can stand with families like Captain Khan’s, or we can succumb to fear and demagoguery. Hopefully, the America I know and love will make the right decisions and stand up for Americans, just as Captain Khan stood up for them. 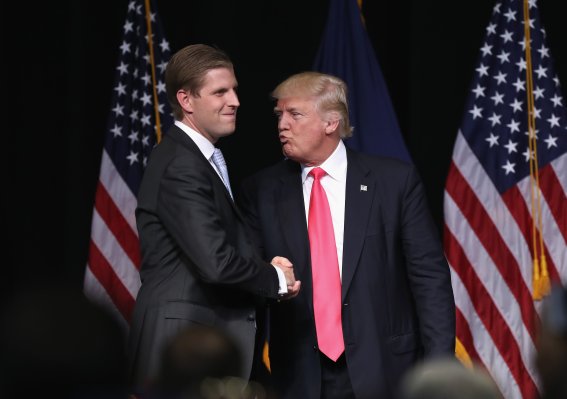 Donald Trump Is Clueless, Disastrous and Scary on Harassment Issues
Next Up: Editor's Pick