It’s a story that’s too weird to not be true. On the Late Late Show Tuesday night, host James Corden aired an old clip of his audition with fellow actor and performance artist Shia LaBeouf for the upcoming action-comedy War Dogs (which, ultimately, stars Miles Teller and Jonah Hill instead of LaBeouf and Corden).

But the weird thing is not that they have the audition tape. It’s that LaBeouf, who appears in the video with a set of shoelaces haphazardly tangled around his shades and drooping over his face, showed up to read lines at the audition just after spending a night in jail, coming directly to the hotel from prison.

Why was he incarcerated? Corden tells the story: “He went to see Cabaret on Broadway, and he forgot that he was in the theater—”

“As will happen!” interjects Todd Phillips, the War Dogs director and Corden’s guest on the show.

“—or he was very drunk, and he got into an altercation,” Corden explains.

It’s a truly bizarre tale — only, of course, adding to the legendary weirdness of LaBeouf.

As for the shoelaces all over LaBeouf’s face, Phillips explains that they remove your laces while you’re in prison in case you use them for nefarious purposes. “So he was carrying his shoelaces, and he put them on his face because he was being weird and wanted to throw you off a little bit,” he tells Corden.

Frankly, we’re just glad LaBeouf made it out of prison in time to record this video, commemorating the Corden-LaBeouf buddy comedy that never was. 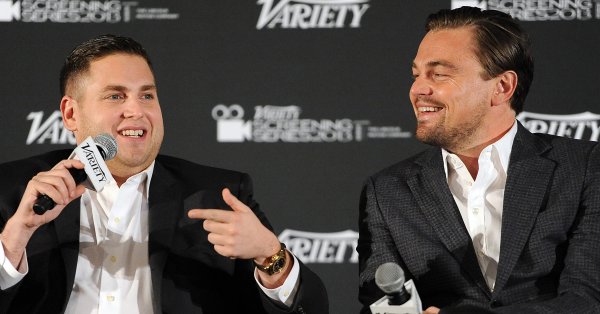 Leonardo DiCaprio Totally Terrified Jonah Hill With This Prank
Next Up: Editor's Pick