Donald Trump Is Clueless, Disastrous and Scary on Harassment Issues

Republican presidential candidate Donald Trump, right, gives an "air kiss" to his son Eric at a campaign rally in Scranton, Penn., on July 27, 2016
John Moore—Getty Images
Ideas
By Laura Bates
Bates is the founder of The Everyday Sexism Project and the author of Everyday Sexism

Strong women simply don’t get harassed in the workplace. They just don’t allow it. They exude a confidence that stops sexists in their tracks, and unwanted sexual advances simply bounce off them as if from an invisible force field. They are completely immune to the negative side effects of rejecting workplace sexual harassment — the sidelining, demotions and vicious rumors that sometimes ensue. As if wearing bulletproof armor, they are left utterly unaffected by hearing demeaning conversations about women’s bodies and sex lives from their colleagues, or seeing pornographic images inappropriately displayed in the workplace.

Clearly, this is nonsense. But this was the picture painted this week by Eric Trump, son of Republican presidential nominee Donald Trump. Speaking on CBS This Morning, Eric suggested that the problem is not men who sexually harass women in the workplace, but female employees who aren’t “strong” enough to defend themselves. Referring to the hypothetical possibility of his sister Ivanka experiencing harassment in the workplace, he said: “Ivanka is a strong, powerful woman, she would not allow herself to be subjected to it.”

This view of sexual harassment as something women can simply choose whether or not to put up with is not uncommon, particularly from those who have no personal experience or understanding of the problem. In reality, workplace sexual harassment affects a huge number of women, regardless of their demeanor, dress, behavior or career type. It often involves inappropriate behavior from senior colleagues in a position of power over the victim, which makes speaking out extremely difficult, as many women fear losing their jobs if they dare to “make a fuss.” This is particularly true for those on insecure or casual contracts, people working in low-paid jobs (who are disproportionately likely to be women of color), and those in workplaces without HR departments. A recent study found that 1 in 3 women between the ages of 18–34 has been sexually harassed at work, and an overwhelming 71% did not feel able to report the issue.

A snapshot of women’s experiences reported in their own words to the Everyday Sexism Project reveals the complexity of workplace sexual harassment and the difficulties of trying to deal with it:

“A male boss said he’d ‘love to bend me over’ and more. I reported it to a female supervisor who said I was being ‘sensitive.”

“Saw my hours cut every time I complained to a manager about the co-worker who sexually harassed me.”

“My first male boss repeatedly made passes at me on a work night out. Literally grabbing me and pushing his drunk, sweaty face at mine, trying to kiss me, hands all over me. I told him he was married, too old for me and I worked for him. He told me he didn’t care, didn’t care, and didn’t care.”

“A guy at my work told me he’d get me fired if I didn’t have sex with him. His brother was the boss.”

“When I was 23 my ass was regularly pinched at work. I was too afraid of losing my job to report it.”

Unfortunately, Eric Trump’s views have effectively been echoed by his father, who has made a point of undermining the women who have recently made sexual-harassment allegations against former Fox News CEO Roger Ailes. When USA Today’s Kirsten Powers asked Trump how he would feel if his daughter Ivanka was sexually harassed in the workplace, he responded: “I would like to think she would find another career or find another company if that was the case.” Just like his son, Trump places responsibility for “coping” with the situation entirely on the shoulders of the victimized woman, rather than suggesting that any action should be taken against workplace harassers. He also seems completely ignorant of the fact that for the vast majority of women, “finding another job” is simply not an option.

Ironically, Ivanka Trump herself seems to have a much better grasp than her male family members of the reality of workplace sexual harassment and the difficulty of tackling it. Writing about a former job in her 2009 book , The Trump Card: Playing to Win in Work and Life, she described a fear of being wolf-whistled in front of her boss on a construction site, saying: “If anything like that happened, it would put me into an uncomfortable, no-win situation. If I ignored the inappropriate remarks, I might come across as weak. If I responded too harshly, I’d be a tightly wound witch.”

Of course, even if a woman does feel able to cope with sexual harassment in the workplace, it doesn’t make her immune to the insidious effects of working in an atmosphere where women are belittled and sexist assumptions are made. Even if she isn’t a direct target of harassment herself, how might it affect her chances for promotion, for example, if those in charge of making appointments hold the view that women are inferior second-class citizens, there for the purpose of decoration rather than making a full contribution to the company.

It is this “trickle-down” effect that makes Trump’s comments about women in the workplace particularly worrying. This is a man who has suggested that a woman’s workplace performance is impacted by menstruation; who has reportedly boasted to colleagues in workplace settings about the young women who “want” him; who ordered a mother with a child to “get the baby out of here” during a recent rally; and who told a businesswoman candidate on his reality-television show: “It must be a pretty picture you dropping to your knees.”

All this suggests that a Trump presidency could be disastrous for women’s labor rights. What kind of policies and action on workplace gender equality can possibly be expected from a man who has repeatedly demonstrated his own complete ignorance and personal failings on these issues? His comments hardly inspire confidence about the workplace prospects of any woman working in an administration led by Trump, let alone a whole country. 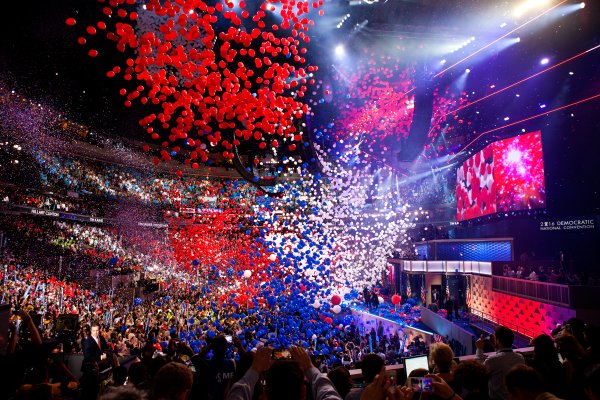 What Congress Could Learn From the Conventions
Next Up: Editor's Pick