Just weeks after Rodrigo Duterte won the Philippines presidential election, a powerful front-page photograph of a woman cradling the limp body of a slain rickshaw driver has ignited an outcry over the new leader’s zero-tolerance crackdown against drugs.

Michael Siaron was reportedly killed by gunmen while he was working in Manila on July 23. In the moments afterward, photographers captured the scene as Siaron’s partner, later identified as Jennilyn Olayres, held him as a crowd looked on. The words “drug pusher” were written on a cardboard sign left next to Siaron’s body.

Olayres recalled the night to the Philippine Daily Inquirer, which published an intimate picture by photographer Raffy Lerma on the front page: “When I was cradling him, I was thinking, ‘How long have you been lying here?’ Nobody bothered to help him. I was furious.” The 26-year-old told the newspaper that Siaron had used drugs but denied he was a dealer.

Duterte, the longtime mayor of Davao City who has bragged about killing criminals in the past, won the presidency on the back of promises of a violent crackdown on drug dealers, which rights groups say has included the use of death squads to target criminals. “We will not stop until the last drug lord, the last financier and the last pusher have surrendered or been put behind bars or below the ground if they so wish,” Duterte said in his first State of the Nation address to lawmakers on July 25, the New York Times reported.

Rights groups allege Duterte’s anti-drug campaign has left hundreds dead and inspired vigilantes to take the law into their own hands. More than 100,000 people have turned themselves in to authorities as users or pushers, the Times added, citing national police statistics.

Phelim Kine, the deputy Asia director for Human Rights Watch, told TIME the image has “humanized the cost of this war on drugs,” and raised concerns among those who may have supported the president’s anti-crime campaign. “I suspect it will be part of a growing sense of buyer’s remorse among the Filipino population that voted him into office.”

Kine said only time will tell if the image helps turn the tide against Duterte. “I think it’s spooking people in a positive way and we hope that will cause some momentum in terms of public demands for accountability,” he said. “We’re seeing movement and whether that actually moves the needle in terms of what the government and police and vigilantes are doing, that’s a longer-term battle.”

For her part, Olayres told the Inquirer she doesn’t expect justice. “I know we won’t get that, especially since people believe the cardboards—cardboards can never prove if the slain person is really a pusher,” she said. “I just want to clear my husband’s name.”

The photo of Siaron’s corpse did not escape the president’s attention, according to the Inquirer. Duterte slammed the image as “melodramatic” and dismissed those who likened it to a work of renaissance art.

Most Popular on TIME
1
Why Is America So Divided Today?
2
Melania Trump's 'Blood' Red White House Holiday Trees Bestow the Internet With So Many Gifts
3
The History of Racism in White Christianity 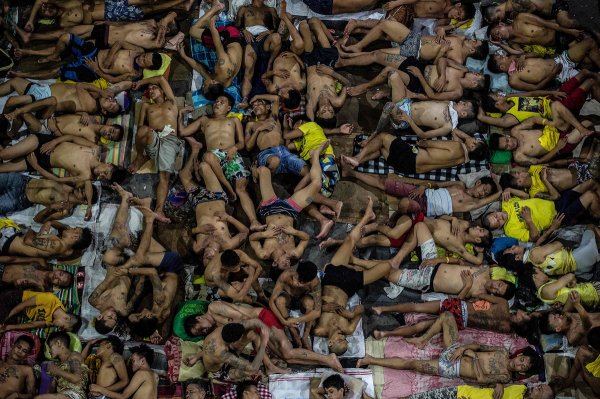 This Photograph Makes Life Inside a Philippines Jail Look Like Dante's 'Inferno'
Next Up: Editor's Pick