What Police Might Not Know About an Autistic Man

Live long enough and your life will circle back to meet you.

There mine was, staring back at me from the screen: an African-American man lying on his back, arms raised, yelling to police to put their guns away. Sitting next to him on a North Miami street is a young man on the autism spectrum, playing with a toy truck. Soon, the black man was shot, and the guy with autism was locked in a hot police car, murmuring Disney dialogue.

As the video ran on my computer, I slipped backward more than twenty years. It was 1993. Our family had just moved to nation’s capital for my job and Owen, our younger son, was acting strange. Just shy of three, he’d stopped talking, didn’t sleep, wouldn’t meet your gaze. Soon the doctors told us it was regressive autism—striking about one-third of all kids on the spectrum—and that he may never speak again.

A month later, while reporting across town in a blighted urban high school, I met a prickly young honor student, Cedric Jennings, and his family—a dad in jail and a mom, once on welfare, who raised him near one of the city’s worst drug corners. Over years, the family tried to help me, a white guy, understand what it felt like to be black in America, while my wife Cornelia and I struggled to understand what it felt like to be Owen, a silent child who drew stares. Writing about society’s outcasts came to define my public life, while, each day, bit by bit, our son taught us what it was like to be left behind. Cedric and Owen, side by side.

Back here in the present, I flipped between watching the rage-infused Republican convention and that North Miami video. The guy with autism, Arnaldo Rios Soto, 26, had wandered from a group home and ended up in the street. Someone called the cops—he was acting erratically and had something shiny in his hand. Maybe a suicide, or worse. The police moved quickly. But not as quickly as his therapist, Charles Kinsey, who found Arnaldo in the roadway, calmed him down, called for help and laid down in the street, Arnaldo beside him. Police in SWAT gear were soon poised behind nearby telephone poles—maybe twenty yards away—their guns drawn. That’s when Kinsey, arms raised, called out, loud and clear, ”All he has is a toy truck in his hand. A toy truck. I am a behavior tech at a group home. That’s all it is. There’s no need for guns.” Pause. Moments later, three bullets are fired; officers descend. “Why did you shoot me?” Kinsey, struck in the leg, says he asked the officer. The officer’s first response, standing over a bleeding black man and a young man holding his toy truck, may have been the most honest: “I don’t know.”

The 47-year old Kinsey—unarmed—spent the next twenty minutes handcuffed, face-down on the hot pavement, bleeding. Would the outcomes, from start to finish, have been different if Kinsey were a white man, shouting that he was a therapist? Would that comport more neatly with a police officer’s assumptions of what a therapist is supposed to look like, prompting his weapon to remain holstered? These are the questions that tear at the nation’s fabric. Snap judgments borne of fear, confusion or ignorance—a tyranny of supposed to’s—marginalize whole populations, shape identities, life outcomes, law enforcement, social policy and, in heated moments, can get you killed… if you stand on the receiving end of an assumption.

The local police chief offered statements of conciliation and concern—part of a well-worn script—as he launched investigations that have since garnered seemingly conflicting testimony from the cops. Kinsey says he told the officers Arnaldo was autistic, though that’s not audible on the video that was posted; police claim that, in any event, they couldn’t hear him. The police union, meanwhile, issued a statement that officers were, in fact, not trying to shoot the supine black therapist. It was accident. They were trying to shoot the autistic man. No, this was not another tragedy of America’s long-standing racial strife. No worries there. The injury was intended for the member of much less-evolved interest group—young men with autism.

The gun of law-and-order suddenly turned from the black community to the one where my son lives. And, yes, it does feel different to observe and empathize—to understand as much as can be known without walking through each day as a racial suspect—than to feel that nozzle pointed close to home.

In the video, Arnaldo does seem angry. Kinsey implores him to lie on the ground, as the officers have ordered. Arnaldo ignores him, and shouts that Kinsey should “shut up.” He embodies a conundrum that is autism. Moments after the shooting, police locked a traumatized Arnaldo in the police cruiser for hours. Reports were that officers joked he was “loopy,” reciting lines from Disney movies. Since then, Arnaldo has scarcely slept or eaten.

After nearly a week trolling North Miami news reports, I couldn’t bear any more. I closed my computer and left for a nearby movie theater for a screening of Life, Animated, the feature-length documentary—largely drawn from a book of the same name Cornelia and I published in 2014—that follows Owen in a search for what he calls “the elusive independent life.” It’s in movie theaters these days. The twist of his story, now widely known, is how Owen, as a silent boy, memorized 50 Disney animated movies—the same words Arnaldo was saying in the back of the police vehicle. If you threw Owen a line, he’d throw back the next one. We began to speak in Disney dialogue; playing scenes in the basement—teed up for every need, emotion or occasion—night after night.

Over years, he got his speech back; he learned to read largely by reading credits. He created an emotional language from favorite lines and lyrics. And he eventually rewrote Disney’s traditional narrative arc with an original story, “The Land of the Lost Sidekicks.” He believes we’re all really sidekicks—at our best when we help others fulfill their destiny—and, in doing so, we find our own. Along the way, he gave us all Sidekick identities—Rafiki for me, Missus Potts for Cornelia (only Walt, his older brother was identified as a hero)—as we all helped him use his passion as a pathway, to make sense of himself and his place in the world. ASD folks, we’ve found, use these interests, or affinities, to comfort themselves, identify emotions and decipher a complex world. It’s what worked for our son. In fact, it’s the way all teaching and learning works best—by tapping a child’s intrinsic motivation and harnessing the power of story. Owen and folks like him are just the most extreme cases.

At a Q&A after the screening, Owen manages a feat of pattern-recognition—one of the many “compensatory gifts” found among those on the spectrum—by matching real people with their appropriate Disney character, among the hundreds in the company’s cinematic pantheon. He’s asked to do Donald Trump. After a moment, he finds a match: “Gaston from Beauty and the Beast. He is handsome but insecure. He’s a bully. He uses fear of people not like him to gather a mob. People think he’s a hero, but by the end they find out he’s a villain. Donald Trump is like an old Gaston, but orange-y.” Cornelia and I are surprised. We figured he wasn’t attentive to the current political turmoil. We were wrong, and an assumption dissolved.

In this summer of our discontent, I can only wonder what dialogue Arnaldo summoned in that hot car—what patterns he was recognizing on behalf of Charles Kinsey, a sidekick who’d found his inner hero, and what lines of simple truth he has for a traumatized nation.

Ron Suskind’s most recent book is Life, Animated. He teaches “Public Narrative and Justice” at Harvard Law School and is the founder of Sidekicks, a builder of augmentative technologies for the differently-abled. 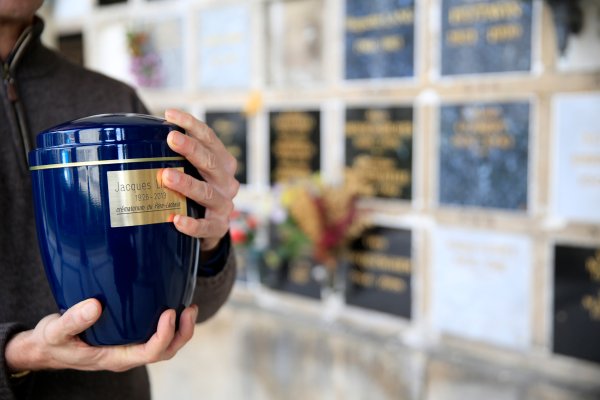 Cremation Is Now Outpacing Traditional Burial in the U.S.
Next Up: Editor's Pick