Hundreds of migrant men, women and children along with tourists and locals board a ferry bound for Athens on June 04, 2015 in Kos, Greece.
Dan Kitwood—Getty Images
By Tara John

British lawmakers on Wednesday heavily criticized Europe’s efforts to tackle the “colossal” number of people seeking asylum, saying a migrant crisis that saw 1.3 million asylum applications in 2015 should have been anticipated but wasn’t.

A year-long report released on Wednesday by the Home Affairs Select Committee— a cross-party group of British members of parliament that monitors the activity and policies of the British ministry in charge of migration — says the E.U. member states and neighboring countries were “too slow” to respond to the crisis, having failed to anticipate the enormous scale of the migrant flows, and criticized their inability to work together to forge a solution.

“Europe’s efforts to address this colossal refugee crisis has been lamentable,” the committee’s chair Keith Vaz said in a statement. “The atrocious conditions in migrant camps within and on the borders of the richest countries on earth is a source of shame. It is horrifying that large numbers of the 85,000 unaccompanied children already in the E.U. have gone missing shortly after arrival, facing abuse and exploitation. They have become the E.U.s ‘disappeared ones.'”

The report highlights a raft of issues such as the weakness of Frontex, the E.U.’s agency charged with protecting its borders; the failure of E.U. countries to help Greece and Italy disrupt illegal migration over the Mediterranean sea routes and crack down on human traffickers; and the destitute conditions of the Calais ‘jungle’ refugee camp in France.

Frontex struggled in 2015 due to its limited staffing and resources, the report says. The agency employs only around 300 people and also needs a member state’s consent before it can intervene in an issue, a weakness illustrated in 2015 when Greece refused its assistance and allowed unlimited numbers of migrants to cross its border into the rest of Europe.

Coastal nations like Italy and Greece had been left to deal with the burden of the crisis, the committee concluded, be it through identifying migrants or acting as a deterrent for people smugglers. An example the report provided was the ‘hotspot’ programs in Italy and Greece, which aid officials in managing large arrivals by sea.

“All E.U. national governments should share the burden and contribute to disrupting the activities and destroying the boats and equipment of criminal elements who are the source of much of the migrant crisis, and who are the only party in this crisis to have gained from the suffering of vulnerable people,” the committee wrote. It also said it has yet to see evidence of a long-term solution by the French and British to the “absolutely atrocious” conditions of the Calais ‘Jungle’ refugee camp.

British select committees are seen as a vital check to government or powerful individuals. While they act as watchdogs, which can advise for change through recommendations in a report, the select committees have no remit to craft legislation. 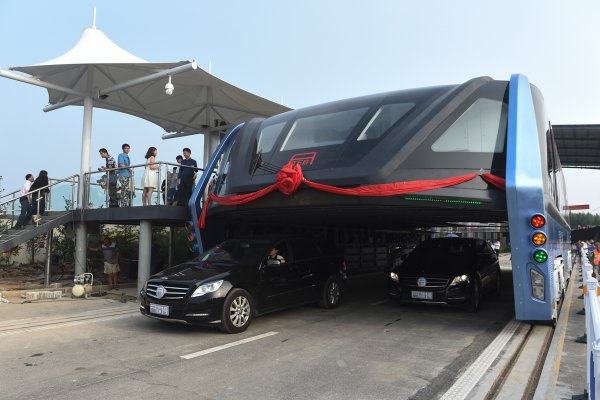 Look at This Insane Car-Swallowing Bus China Made
Next Up: Editor's Pick