Donald Trump gives a thumbs up as New Jersey Gov. Chris Christie waves to the crowd as they walk off the stage after a rally at Lenoir-Rhyne University in Hickory, N.C., March 14, 2016.
Chuck Burton—AP
By Tessa Berenson

Rare moments of daylight peeked through between Chris Christie and Donald Trump Tuesday, as the New Jersey Governor broke with two of Trump’s statements and a longtime aide said she wouldn’t vote for Trump.

Maria Comella, Christie’s former deputy chief of staff for communications who stopped working for the Governor after he ended his presidential bid, told CNN she would vote for Hillary Clinton in November. “Donald Trump has been a demagogue this whole time, preying on people’s anxieties with loose information and salacious rhetoric, drumming up fear and hatred of the ‘other,'” Comella said.

Christie’s office did not immediately respond to request for comment. Comella’s announcement came just one day after Sally Bradshaw, a former adviser to Jeb Bush, said she was leaving the Republican Party and might vote for Clinton.

Christie allied himself with Trump after he dropped out of the race and quickly moved into the nominee’s inner circle. But on Tuesday, Christie said Trump’s criticism of the Khans, a Muslim couple who lost their son in Iraq in 2004 and spoke against Trump at the Democratic convention, was “inappropriate.”

“We need to honor their sacrifice for our country and we need to honor their son’s sacrifice for our country,” Christie said, Politico reports. “And to focus on anything other than that, to me, is missing the point. … My view on this is that the Khans have a right to say whatever it is they want regarding the loss of their son and that for all the Gold Star families out there, they have put forward a sacrifice that I cannot fathom as a parent.”

Christie also responded to a question about Trump referring to Clinton as “the devil.”

“Not the devil, no,” Christie said. “But unqualified to be president of the United States.” 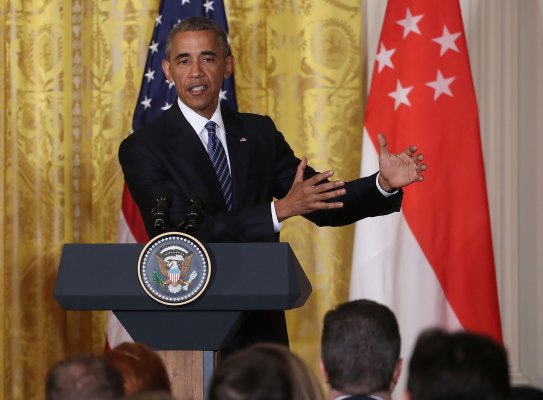 President Obama Digs In Heels on Trans-Pacific Trade Deal
Next Up: Editor's Pick